Hit the blue reply button if you have feedback.

This is part of a project to openly discuss and archive all political leaflets in the Eastleigh Area. Hit the big blue reply button to respond and discuss this leaflet. 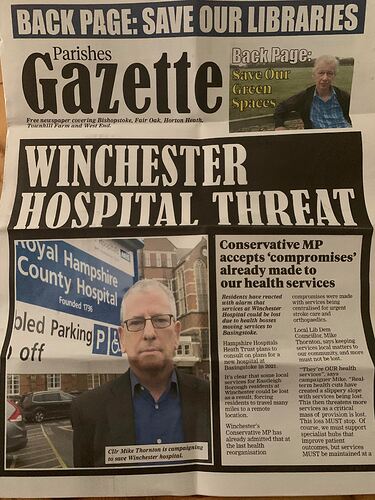 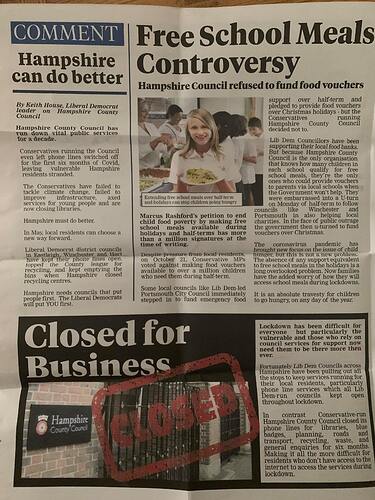 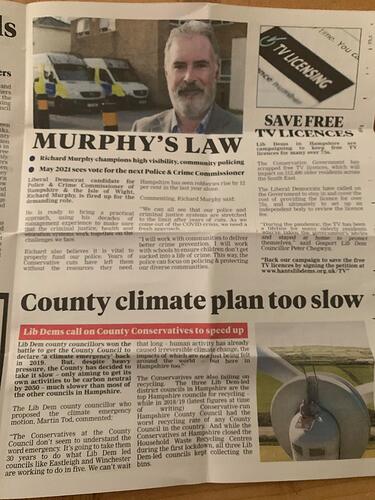 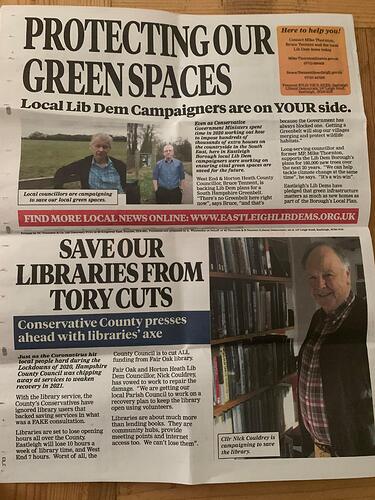 Residents have reacted with alarm that services at Winchester Hospital could be lost due to health bosses moving services to Basingstoke.

Hampshire Hospitals Health Trust plans to consult on plans for a new hospital at Basingstoke in 2021.

It’s clear that some local services for Eastleigh Borough residents at Winchester could be lost as a result, forcing residents to travel many miles to a remote location.

Winchester’s Conservative MP has already admitted that at the last health reorganisation compromises were made with services being centralised for urgent stroke care and orthopaedics.

Local Lib Dem Councillor, Mike Thornton, says keeping services local matters to our community, and more must not be lost.

“They’re OUR health services”, says campaigner Mike. "Real-term health cuts have created a slippery slope with services being lost. This then threatens more services as a critical mass of provision is lost. This loss MUST stop. Of course, we must support specialist hubs that improve patient outcomes, but services MUST be maintained at a…

Marcus Rashford’s petition to end child food poverty by making free school meals available during holidays and half-terms has more than a million signatures at the time of writing.

Despite pressure from local residents on October 21, Conservative MPs voted against making food vouchers available to over a million children who need them during half term.

Some local councils like Lib Dem-led Portsmouth City Council immediately stepped in to fund emergency food supprot over half-term and pledged to provide food vouchers over Christmas holidays - but the Conservatives running Hampshire County Council decided not to.

Lib Dem Councillors have been supporting their local food banks.

But because Hampshire County Council is the only organisation that knows how many children in each school qualify for free school meals, they’re the only ones who could provide vouchers to parents via local schools when the Government won’t help. They were embarrassed into a U-turn on Monday of half-term to follow councils like Winchester and Portsmouth in also helping local charities. In the face of public outrage the government then u-turned to fund vouchers over Christmas

The coronavirus pandemic has brought new focus on the issue of child hunger, but this is not a new problem. The absence of any support equivalent to free school meals in the holidays is a long overlooked problem. Now families have the added worry of how they will access school meals during lockdowns.

It is an absolute travesty for children to go hungry, on any day of the year.

Hampshire County Council has run down vital public services for a decade.

Conservatives running the Council even left the phone lines switched off for the first six months of Covid leaving vulnerable Hampshire residents stranded.

The Conservatives have failed to tackle climate change, failed to improve infrastructure, axed services for young people and are now closing libraries.

Hampshire must do better.

In May, local residents can choose a new way forward.

Closed for Business
Lockdown has been difficult for everyone but particularly for the vulnerable and those who rely on council services for support now need them to be there more than ever.

Fortunately Lib Dem Councils across Hampshire have been pulling out all the stops to keep services running for their residents, particularly phone line services which all Lib Dem-run councils kept open throughout lockdown.

In contrast Conservative-run Hampshire County Council closed its phone lines for libraries, blue badges, planning, roads and transport, recycling, waste, and general enquiries for six months. Making it all the more difficult for residents who don’t have access to the internet to access the services during lockdown.

Liberal Democrat candidate for Police & crime Commissioner of Hampshire & the Isle of Wight, Richard Murphy, is fired up for the demanding role.

He is ready to bring a practical approach, using his decades of management experience to make sure that the criminal justice, health, and education systems work together on the challenges we face.

Richard also believes it is vital to properly fund our police. Years of Conservative cuts have left them without the resources they need.

Hampshire has seen robberies rise by 12 per cent in the last year alone.

Commenting, Richard Murphy said:
"We can all see that our police and criminal justice systems are stretched to the limit after years of cuts. As we come out of the COVID crisis, we need a fresh approach.

I will work with communities to deliver better crime prevention. I will work with schools to ensure children don’t get sucked into a life of crime. This way, the police can focus on policing & protecting our diverse communities."

Save Free TV Licences
Lib Dems in Hampshire are campaigning to keep free TV licenses for many over 75s.

The Conservative Government has scrapped free TV licences, which will impact on 512,490 older residents across the South East.

The Liberal Democrats have called on the Government to step in and cover the cost of providing the licence for over 75s, and ultimately to set up an independent body to review the licence fee.

“During the pandemic, the TV has been a lifeline for many elderly residents who’ve taken the governments advice and stayed at home to protect themselves” said Gosport Lib Dem Councillor Peter Chegwyn.

County climate plan too slow
Lib Dems call on County conservatives to speed up!
Lib Dem county councillors won the battle to get the County Council to declare a climate emergency back in 2019. But, despite heavy pressure, the County has decided to take it slow - only aiming to get its own activities to be carbon neutral by 2050 - much slower than most of the other councils in Hampshire.

“The Conservatives at the County Council don’t seem to understand the word emergency. Its going to take them 30 years to do what Lib Dem led councils like Eastleigh and Winchester are working to do in five. We can’t wait that long - human activity has already caused irreversible climate change, the impacts of which are not just being left around the world - but here in Hampshire too”.

PROTECTING OUR GREEN SPACES
Local Lib Dem Campaigners are on YOUR side.

Even as Conservative Government Minister spent time in 2020 working out how to impose hundreds of thousands of extra houses on the countryside in the South East, here in Eastleigh Borough local Lib Dem campaigners were working on ensuring vital green spaces are saved for the future.

Long-serving councillor and former MP, Mike Thornton, supports the Lib Dem Borough’s plans for 160,000 new trees over the next 20 years. “WE can help tackle climate change at the same time”, he says. “Its a win-win”.

Eastleigh’s Lib dem’s have pledged that green infrastructure matters as much as new homes as part of the Borough’s Local Plan.

SAVE OUR LIBRARIES FROM TORY CUTS

Just as the Coronavirus hit local people hard during the Lockdowns of 2020, Hampshire County Council was chipping away at services to weaken recovery in 2021.

With the library service, the County’s Conservatives have ignored library users that backed saving services in what was a FAKE consultation.

Libraries are set to lose opening hours all over the County Eastleigh will lose 10 hours a week of library time, and West End 7 hours. Worst of all County Council is to cut ALL funding from Fair Oak library.

Fair Oak and Horton Heath Lib Dem Councillor, Nick Couldrey has vowed to work to repair the damage. “We are getting our local Parish Council to work on a recovery plan to keep the library open using volunteers. Libraries are about much more than lending books. They are community hubs, provide meeting points and internet access too. We can’t lose them”