And then destroyed earlier today: 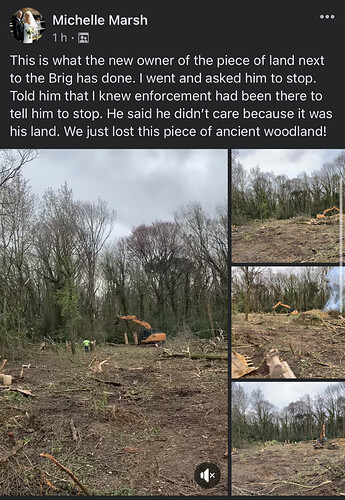 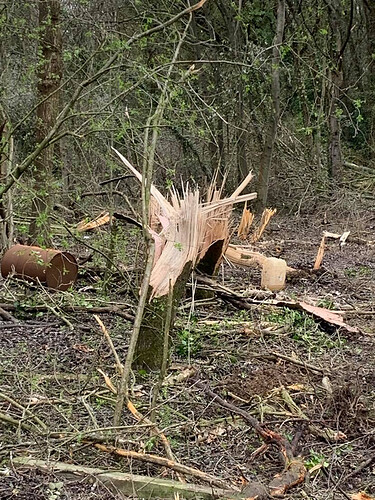 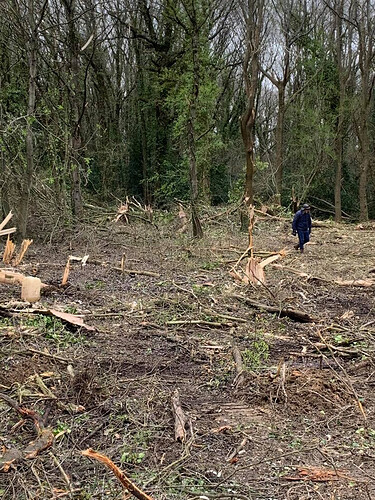 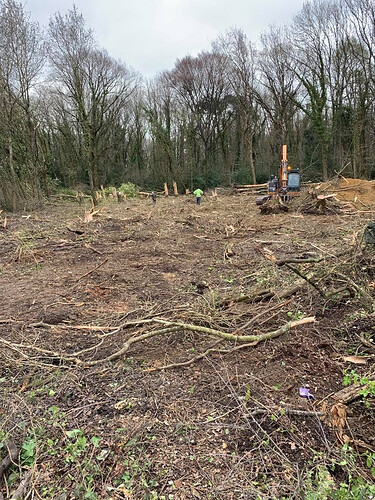 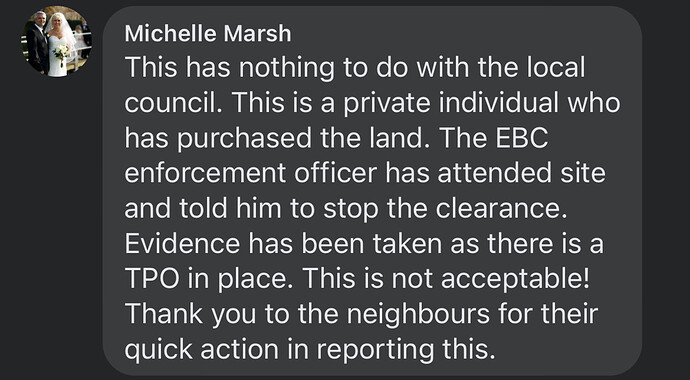 If a TPO has been breached I sincerely hope the ‘land owner’ receives maximum penalty especially as enforcement told him to stop.

Outrage has rippled through the community in Horton Heath this weekend including both Councillors and Eastleigh MP Paul Holmes stepping in after a new land owner with a 7.5 tonne digger rips down ancient forest during protected bird nesting season on Botley Road.

Neighbouring property’s were shocked to see the destruction being caused to woodland adjacent to the Brigadier Gerard Public House, on Saturday 10th April with a large fire on the site.

The site containing a variety of highlighted trees which have Tree Preservation Orders (TPO’s) attached under (TPO 839) and is approximately 1 acre of woodland/land recently sold at auction on the 10th March 2021 for £81,000, but the new owner had other ideas and that was to rip the forest down.
This was despite previous specialist tree protection work covering this site when the adjacent development was undertaken.

Total ignorance as to the protection of wildlife and nesting birds was given and due to the protected nesting season running from the 1st March until the 31st July (Natural England) and the need for an ecologist to be consulted prior to any works being carried out it is likely a range of wildlife will now suffer the loss of nests and habitat including ground nesting birds and special consideration must also be given to the presumed presence of bats.

No planning application has been made for this site, but a recently developed site next door highlighted in a 43 page tree report completed in October 2019 a large area containing trees and root areas including on this site were to be retained and protected. (Copy attached).

As part of the detailed report produced by CBA, it states CBA Trees has been informed by Eastleigh Borough Council that a woodland Tree Preservation Order (TPO839) has been issued, protecting trees on and adjacent to the site.

It was reported that an Enforcement officer attended the site, and requested any works to cease, but the owner failed to listen sparking further anger from Councillors and MP Paul Holmes.

Eastleigh Councillor Michelle March visited the site to ask the owner to stop. She stated on social media;
“This is what the new owner of the piece of land next to the Brig has done. I went down and asked him to stop. Told him that I knew enforcement had been there to tell him to stop. He said he didn’t care because it was his land. We just lost this piece of ancient woodland!
This has nothing to do with the council. This is a private individual who has purchased the land. The EBC enforcement officer has attended site and told him to stop the clearance. Evidence has been taken as there is a TPO in place. This is not acceptable! Thank you to the neighbours for their quick action in reporting this.”

Bishopstoke Councillor Gin Tidridge said;
“Absolutely appalling. Woodland has been bought next to the Brigadier General in Horton Heath and today, the new owner has been destroying it and burning the trees. Many of the trees have TPOs, I believe that it is a site of ancient natural woodland. And I want to praise the brave actions of Cllr Michelle Marsh (not an independent btw) who did all she possibly could to try and stop this, getting the Council involved, trying to get the police involved and even approaching the culprit herself.”

Eastleigh MP Paul Holmes also spoke out stating;
“I’ll be speaking to EBC alongside Steven Broomfield on Monday for enforcement action to take place on this man”

New laws were brought forward under the Town and Country Planning (Tree Preservation)(England) Regulations 2012 to give greater faster protection to woodland, and owners. The local authority must, as soon as practicable after making an Order and before it is confirmed, serve ‘persons interested in the land affected by the Order.
The new owner of one month would have been aware of the orders in place during the purchase stage and would have been required to submit what is known as a Section 211 notice for proposed tree work to be carried out on the site. A section 211 notice is a notice submitted to the local planning authority by landowners or their agents. It notifies the authority of proposed work on trees in a conservation area that are not subject to a Tree Preservation Order.

By ignoring the TPO’s in place and failing to stop work on site when lawfully requested by an Enforcement officer provide that anyone who, in contravention of a Tree Preservation Order
cuts down, uproots or wilfully destroys a tree; or
tops, lops or wilfully damages a tree in a way that is likely to destroy it; or
causes or permits such activities
is guilty of an offence.

Section 210(2) of the Town and Country Planning Act 1990 provides that anyone found guilty of these offences is liable, if convicted in the magistrates’ court, to a fine of up to £20,000. In serious cases a person may be committed for trial in the Crown Court and, if convicted, is liable to an unlimited fine. Section 210(3) provides that, in determining the amount of fine, the court shall take into account any financial benefit which has resulted, or is likely to result, from the offence.

To bring a successful prosecution the authority should have sufficient evidence to show that:
the tree was protected by an Order at the relevant time, or was in a conservation area;
an action which is an offence under section 210 of the Town and Country Planning Act 1990 has been carried out; and
the defendant has carried out, caused or permitted this work.
The elements of the offence must be proved beyond reasonable doubt. It may be possible to bring a separate action for each tree cut down or damaged. Further guidance can be found at paragraph 148.

The burden of proof to show, on the balance of probabilities, that work fell within the terms of a statutory exemption is placed on the defendant.

In general, it is no defence for the defendant to claim ignorance of the existence of an Order. Nevertheless, the authority should ensure that a valid Order exists, that the tree in question was clearly protected by it and that it has carried out its statutory functions properly and complied with all procedural requirements.

As an enforcement officer has visited the site and instructed the owner to stop with a temporary stop notice, it is likely the council well now have to seek an urgent injunction through the High Court or County Court.

If a TPO has been breached I sincerely hope the ‘land owner’ receives maximum penalty especially as enforcement told him to stop.

Maximum penalty looks to only be £20,000 which makes the land which was bought for £81,000 look super cheap if it’s then used to build houses on!!

Respect to Michelle Marsh for having the courage to challenge in person.

Steve said “Visited the Brigadier Gerard site earlier. These were taken at 7.15 this morning.

The yellow ‘OIL’ was marked at 8.40 last night - an oil pipeline runs under the site.

This will create mayhem for the owner: it runs under the Blue Cross site and when I lived there we found permanent building is not allowed within several yards.

So we might have suffered this environmental carnage for no reason. 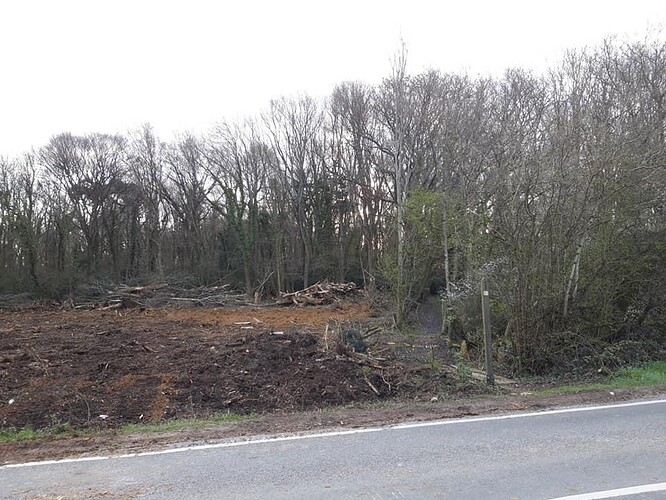 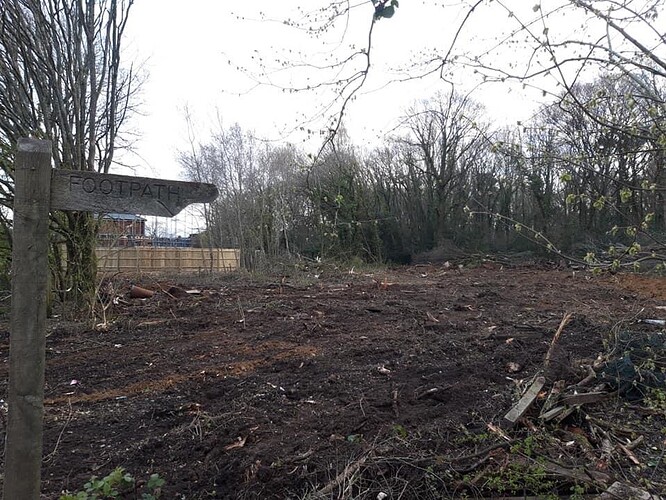 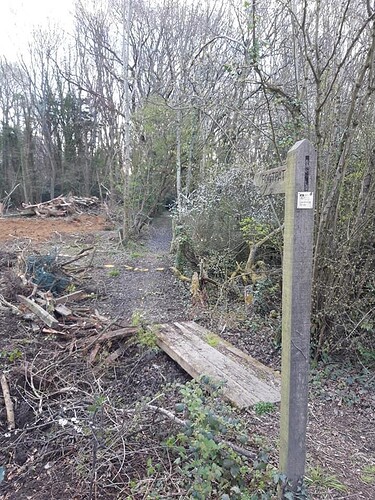 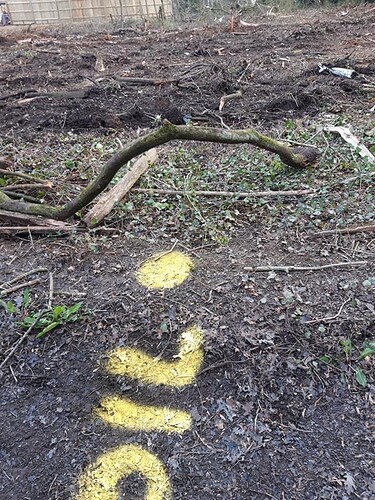 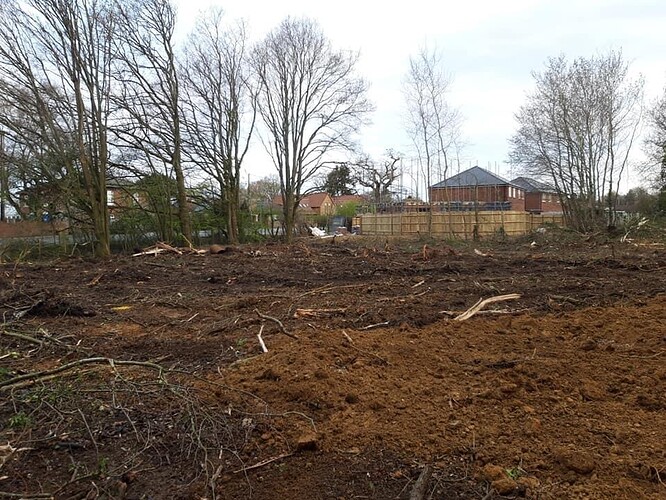 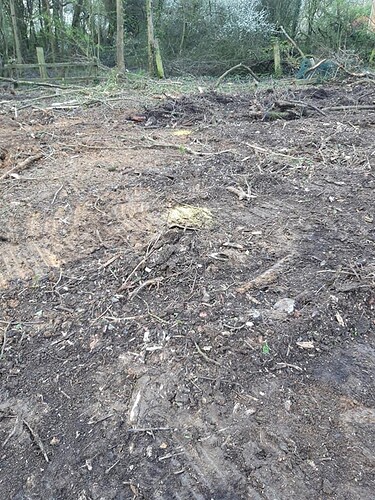 Rumour has it a fuel pipeline from Fawley to Heathrow runs under the site.

Updated from Cllr Michelle Marsh: “I have been on site since 8 this morning. Wildlife Officer has been there to document damage caused.”

“Police Wildlife Officer has spoken to the Enforcement Officer this morning. He came to site to document it. CHL attended last night and have marked the position of the oil pipe. Thanks to Debbie and Phil the new owners of the Brigadier Gerrard for meeting me on site and for your offer of support. Lots of lovely residents showing support. ENC reference number is ENF/2021/191. Please help us by contacting Natural England (enquiries@naturalengland.org.uk) and any agencies that can help us to bring to justice. It is not acceptable to say I own the land and can afford the fines. Thank you to all the people backing me to bring change and protect our environment.” 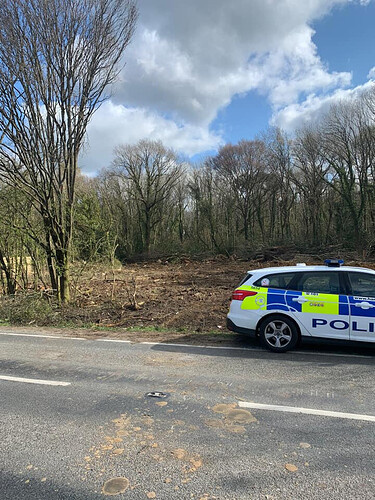 It is not acceptable to say I own the land and can afford the fines.

Not sure but that might be per tree? And extra for destroying nests/habitat? Hopefully lots of photos and evidence will lead to a successful criminal prosecution…

The background of the ‘community’ involved in this means they rarely, if ever, get prosecuted.

It’s so upsetting to see what has taken place here. Do we know who sold the land to Mr Barney? It might be that they knew his intention and this can be used as further evidence in the case against him. It also raises serious questions around the legitimacy of selling ancient woodland to private individuals.

Do you want to help?

In response to the recent destruction of ancient woodland near Horton Heath, the following is a request for community action from Cllr Michelle Marsh.

ENC reference number is ENF/2021/191. Please help us by contacting Natural England to raise this issue (enquiries@naturalengland.org.uk) and any agencies that can help us to bring justice.

Please can anyone wanting to help email the Secretary of State for environment: secretary.state@defra.gov.uk

I emailed asking for laws to be put in place-
We need the following:

This helps increase the weight of the case for action paul.holmes.mp@parliament.uk

I’ve just emailed both contacts asking for urgent help to put a stop to this destruction but to also add the points into law that were mentioned above. Disgraceful behaviour to see this land ruined. Well done to everyone who has tried to do the right thing here.

Cllr Michelle Marsh has been on site from early this morning and has posted an update on the fire which has been started 20 metres from the fuel pipeline:

The Fire department were notified by Mr Barney that he was lighting a controlled fire with water on site. As a result they would not attend when residents started calling 999. The police have been attended. We have notified the pipeline and enforcement are aware. Significant air pollution today. Mr Barney knows what he is doing when he gets the diggers in at 5am to pile the wood up! His men disappeared quickly when the police arrived. Fire is now struggling to take hold despite the cardboards, pallets and tyres they brought. If however it does take hold please call the fire department as it is now an unattended fire.

Link to the two previous planning applications for a) four properties and b) one property adjacent to the Brigadier Gerard.

There are onward links within these to the ecology report etc.

Cllr Marsh is suggesting emailing the Environment Secretary on the wrong email address, which you think she would know as a councillor.

You need to write/email George Eustice on his Department email address or better yet, contact the local MP Paul Holmes who can also write directly.