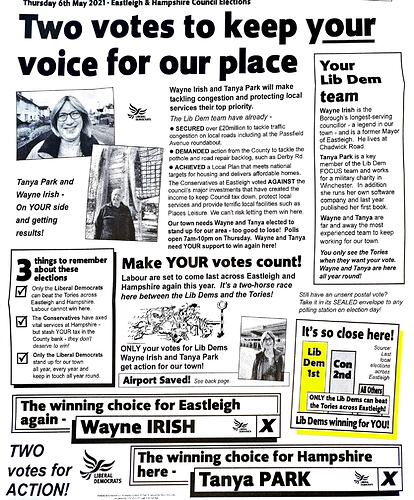 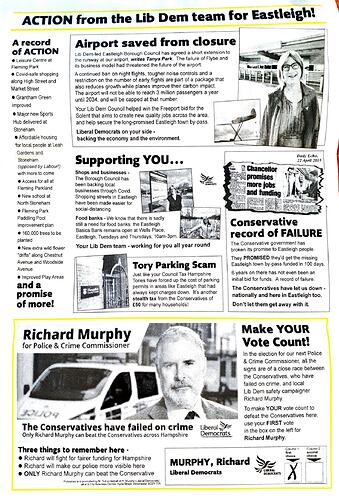 Tanya Park and Wayne Irish - On YOUR side and getting results!

The Lib Dem team have already -
• SECURED over £20million to tackle traffic congestion on local roads including at the Passfield Avenue roundabout.

• DEMANDED action from the County to tackle the pothole and road repair backlog, such as Derby Rd.
• ACHIEVED a Local Plan that meets national targets for housing and delivers affordable homes.

The Conservatives at Eastleigh voted AGAINST the council’s major investments that have created the
income to keep Council tax down, protect local services and provide terrific local facilities such as
Places Leisure. We can’t risk letting them win here.

Your Lib Dem team
Wayne Irish is the Borough’s longest-serving councillor - a legend in our town - and is a former Mayor of Eastleigh. He lives at Chadwick Road.
Tanya Park is a key member of the Lib Dem FOCUS team and works for a military charity in Winchester. In addition, she runs her own software company and last year published her first book.

Wayne and Tanya are far and away the most experienced team to keep working for our town.

You only see the Tories when they want your vote.
Wayne and Tanya are here all year round!

Our town needs Wayne and Tanya elected to stand up for our area - too good to lose! Polls open 7am-10pm on Thursday. Wayne and Tanya need YOUR support to win again here!

Make YOUR votes count!
Labour are set to come last across Eastleigh and Hampshire again this year. It’s a two-horse race here between the Lib Dems and the Tories!
ONLY your votes for Lib Dems
Wayne Irish and Tanya Park
get action for our town!

Still have an unsent postal vote?
Take it in its SEALED envelope to any
polling station on election day!

3 things to remember about these elections

ACTION from the Lib Dem team for Eastleigh!

Airport saved from closure
Lib Dem-led Eastleigh Borough Council has agreed a short extension to the runway at our airport, writes Tanya Park. The failure of Flybe and its business model had threatened the future of the airport.
A continued ban on night flights, tougher noise controls and a restriction on the number of early flights are part of a package that also reduces growth while planes improve their carbon impact.
The airport will not be able to reach 3 million passengers a year until 2034, and will be capped at that number
Your Lib Dem Council helped win the Freeport bid for the Solent that aims to create new quality jobs across the area, and help secure the long-promised Eastleigh town by-pass.

Liberal Democrats on your side -
backing the economy and the environment.
A record
of ACTION
• Leisure Centre at Fleming Park
• Covid-safe shopping along High Street and Market Street
• Grantham Green improved
• Major new Sports Hub delivered at Stoneham
• Affordable housing for local people at Leah Gardens and
Stoneham (opposed by Labour!) with more to come
. Access for all at Fleming Parkland
. New school at North Stoneham
• Fleming Park Paddling Pool improvement plan
• 160,000 trees to be planted
• New extra wild flower “drifts” along Chestnut Avenue and Woodside Avenue
• Improved Play Areas
and a promise of more

Supporting YOU…
Shops and businesses -
The Borough Council has been backing local businesses through Covid. Shopping streets in Eastleigh have been made easier for social-distancing.
Food banks - We know that there is sadly still a need for food banks: the Eastleigh Basics Bank remains open at Wells Place, Eastleigh, Tuesdays and Thursdays, 10am-3pm.
Your Lib Dem team - working for you all year round

Conservative record of FAILURE
The Conservative government has
broken its promise to Eastleigh people.
They PROMISED they’d get the missing Eastleigh town by-pass funded in 100 days.
6 years on there has not even been an initial bid for funds. A record of failure.
The Conservatives have let us down - nationally and here in Eastleigh too.
Don’t let them get away with it.

Tory Parking Scam
Just like your Council Tax Hampshire Tories have forced up the cost of parking permits in areas like Eastleigh that had always kept charges down. It’s another stealth tax from the Conservatives of £50 for many households!

Quite possibly the last leaflet we’ll receive from a Central candidate, following @Josh_Constable 's FB Live this morning, potentially limited resources from @ACulley , an earlier leaflet from Raj Sukhdev, and absolutely nothing from Chris Yates.

LDs seem intent on ensuring people know how “bad Labour’s chances are”, while potentially inadvertently hyping up the Tories with it being “SO close here”

Not sure putting the Airport and Mr Irish’s name so close together was the wisest move, but that may be nitpicky. Maybe relying on his “Town Legend” status is enough to overshadow that.

I have to say, following the disgustingly poor form from the Lib Dems this year, this being another leaflet full of flat out lies, I’m done with them and trying to engage positively. I’ve tried to arrange debates and engage them respectfully but their campaign has become desperate and dirty.

Anyone willing to run such a campaign is unfit for office in my view. The willingness to lie on mass produced leaflets and the inability of either of these candidates to turn up for debates or to actually engage with the public is exceedingly poor. And yes, I do hold Tanya and Wayne directly responsible as no candidate doesn’t approve their leaflets. Really disappointed.

Ah, knew I saw it somewhere before, but I checked that one and rhe stories were different. Didn’t see Version 2 though. That’ll teach me for not scrolling

I’ve reached out to Paul Holmes loads about Chris Yates to get info and got nothing back! Raj’s leaflet came through my door Thursday. Disappointed in the Torys lack of comms.

Sadly, I don’t think there is anything (of course @PaulHolmes88 is welcome to correct me).

It’s not great, and also may damage @LisaCrosher 's own campaign (as Josh and Alexander are running for both, and @TParkEastleighN / Wayne Irish appear in one leaflet)

Maybe next local election will have a better presence across the board, especially as people become aware of this platform and @afdy 's new FB group

Maybe something to do with Chris Yates living in Hedge End and I believe helping Jerry Hall with his campaign. Such a shame this is twice in a row they have put a candidate up that doesn’t engage. One year it was Nick Arnold - who again is Hedge End. Perhaps @LisaCrosher you should reconsider your party! Sorry obviously joking