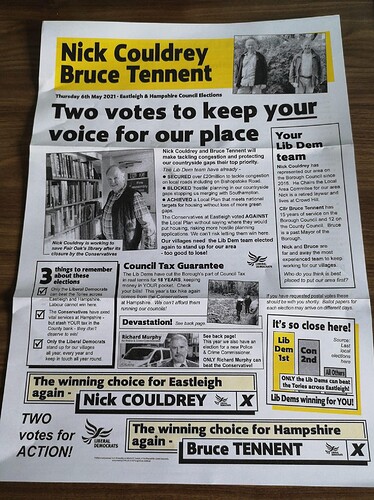 This is the third leaflet from Nick in Fair Oak

The Lib Dem team have already -
• SECURED over £20million to tackle congestion
on local roads including on Bishopstoke Road.
• BLOCKED 'hostile planning in our countryside gaps stopping us merging with Southampton.
• ACHIEVED a Local Plan that meets national targets for housing without loss of more green gaps.

The Conservatives at Eastleigh voted AGAINST the Local Plan without saying where they would put housing, risking more hostile planning applications. We can’t risk letting them win here.

Our villages need the Lib Dem team elected again to stand up for our area - too good to lose!

Your Lib Dem team
Nick Couldrey has represented our area on the Borough Council since 2016. He Chairs the Local Area Commitee for our area. Nick is a retired laywer and lives at Crowd Hill.

Cllr Bruce Tennent has 15 years of service on the Borough Council and 12 on the County Council. Bruce is a past Mayor of the Borough.

Nick and Bruce are far and away the most experienced team to keep working for our villages.
Who do you think is best placed to put our area first?

Council Tax Guarantee
The Lib Dems have cut the Borough’s part of Council Tax in real terms for 18 YEARS, keeping money in YOUR pocket. Check your bills! This year’s tax hike again comes from the Conservatives at Hampshire. We can’t afford them running our councils!

3 things to remember about these elections:

See back page!
This year we also have an election for a new Police & Crime Commissioner.
ONLY Richard Murphy can beat the Conservative!

ONLY the Lib Dems can beat the Tories across Eastleigh!
Lib Dems winning for YOU!

ACTION from the Lib Dem team for our villages

Devastation!
Lib Dem councillors were quickly out on site with planning officials, the police and local residents when a new landowner set to destroying woodland on the edge of Horton Heath close to the Brigadier Gerard pub.
The land had recently been sold but as protected woodland could not be used for development. Cllr Michelle Marsh filmed workers on site REFUSE to stop tree felling. Site clearance continued as the criminal damage marched on.
Michelle and Cllr Nick Couldrey are working with council staff to ensure the site is restored and not developed. The Council has prosecuted the felling of trees with Preservation Orders: this MUST be the case here. Liberal Democrats on your side - protecting our environment and working for you

A record of ACTION:

Supporting YOU…
Shops and businesses -
The Borough Council has been backing local businesses through Covid. Shopping streets in Eastleigh have been made easier for social-distancing.

Food banks - We know that there is sadly still a need for food banks: the Eastleigh Basics Bank remains open at Wells Place, Eastleigh, Tuesdays and Thursdays, 10am-3pm.

Multi packs of kits are available for tests to be taken in the comfort of your own home. There is no need to book simply turn up when open. You can also collect from the Regional Testing site at Southampton Airport (afternoons only). You must be over 18 years of age and not displaying symptoms of Covid-19.

Your Lib Dem team - working for you all year round

Conservative pushes for MORE building here!
Always ask questions when Conservatives talk about housing.
• The Government wants a massive push for MORE housing
• Conservative MPs always agree, then shamelessly claim they oppose local building (they can’t have it both ways!)

Make YOUR Vote Count!
In the election for our next Police & Crime Commissioner, all the signs are of a close race between the Conservatives, who have failed on crime, and local Lib Dem safety campaigner Richard Murphy

To make YOUR vote count to defeat the Conservatives here, use your FIRST vote in the box on the left for Richard Murphy

Only Richard Murphy can beat the Conservatives across Hampshire 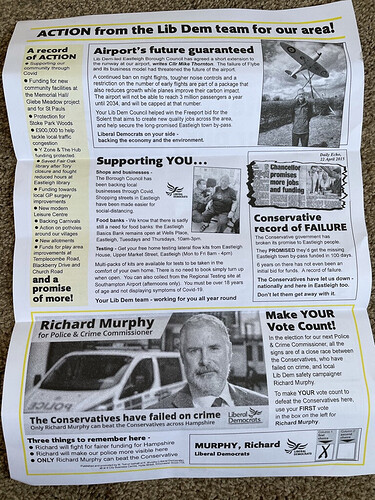