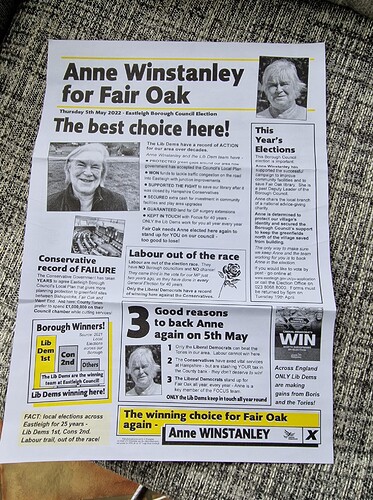 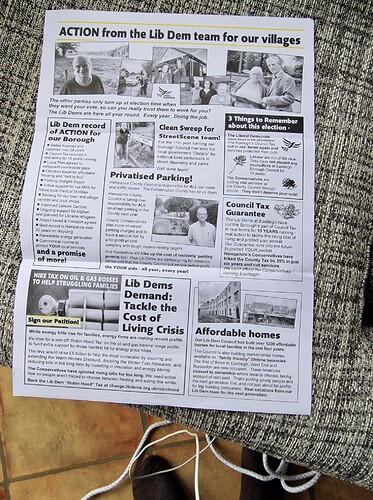 The Lib Dems have a record of ACTION for our area over decades. Anne Winstanley and the Lib Dem team have -
-! PROTECTED green gaps around our area now government has accepted the Council’s Local Plan

ONLY the Lib Dems work for you all year every year Fair Oak needs Anne elected here again to stand up for YOU on our council - too good to lose!

This Year’s Elections
This Borough Council election is important. Anne Winstanley has supported the successful campaign to improve community facilities and to save Fair Oak library. She is a past Deputy Leader of the Borough Council. Anne chairs the local branch of a national advice-giving charity Anne is determined to protect our village’s Identity and secured the Borough Council’s support to keep the greenfields north of the village saved from building. The only way to make sure we keep Anne and the team working for you is to back Anne in the election, If you would like to vote by post - go online at www.eastleigh.gov.uk/pv-application or call the Election Office on 023 8068 8000. Forms must be returned by 5pm on Tuesday 19th April.

Labour out of the race
Labour are out of the election race. They have NO Borough councillors and NO chance! They came third in the vote for our MP just two years ago, as they have done in every General Election for 40 years. Only the Liberal Democrats have a record of winning here against the Conservatives.

3 Good reasons to back Anne again on 5th May

Across England ONLY Lib Dems are making gains from Boris and the Tories!

ACTION FROM THE LIB DEM TEAM FOR OUR VILLAGES
The other parties only turn up at election time when they want your vote, so can you reallytrustthem to work for you? The Lib Dems are here all year round. Every year. Doing the job.

3 Things to Remember about this election

Privatised Parking!
Hampshire County Council is responsible for ALL our roods and traffic issues The Conservative County has let us down Hampshire County Council is taking over responsibility for ALL on-street parking in the County next year.
County Conservatives plan more on-street parking charges and to have a service run by a for-profit private company with tough income-raising targets. And Hampshire will hike up the cost of residents’ parking permits tool Your Lib Dems are campaigning for commonsense and that the County Council put people before profit. On YOUR side all year, every year!

Council Tax Guarantee The Lib Dems at Eastleigh have cut the Borough’s part of Council Tax in real terms for 19 YEARS running - real action to tackle the rising cost of living and protect your pocket Our Guarantee runs into the future to protect YOUR pocket.
Hampshire’s Conservatives have hiked the County Tax by 25% in just six years and cut services. We can’t afford the Conservatives running Eastleigh!

HIKE TAX ON OIL & GAS BOSSES TO HELP STRUGGLING FAMILIES Lib Dems Demand: Tackle the Cost of Living Crisis Sign our Petition!
While energy bills rise for families, energy firms are making record profits. It’s time for a one-off ‘Robin Hood Tax on the oil and gas barons’ mega profits to fund extra support for those hardest hit by energy price hikes The levy would raise £5 billion to help the most vulnerable by doubling and extending the Warm Homes Discount, doubling the Winter Fuel Allowance, and reducing bills in the long term by investing in insulation and energy saving The Conservatives have ignored rising bills for too long. We need action now so people aren’t forced to choose between heating and eating this winter Back the Lib Dem “Robin Hood” Tax at change.libdems.org.uk/robinhood

Affordable homes
Our Lib Dem Council has built over 1200 affordable homes for local families in the last four years. The Council is also building market rental homes available on “family friendly” lifetime tenancies The first of these in Eastleigh, West End and Bursledon are now occupied These tenancies convert to ownership where tenants choose, taking account of rent paid. That’s putting young people and the next generation first, and not just about lat profits for big building companies

Real solutions from our Lib Dem team for the next generation.

Anne’s for Bishopstoke, but dropped the leaflet to people in Fair Oak claiming to be for Fair Oak. There is confusion here because the Bishopstoke ward boundary overlaps Fair Oak.

I suspect Anne modified the leaflet to make her sound more attractive to people who live in Fair Oak.

Also crazy on this leaflet:

Transcript done. Planning to do one of each Party and the Independents before I do more individual ones.