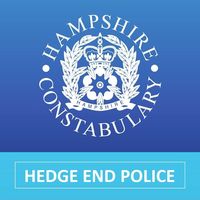 Hedge End Police. 6,075 likes · 326 talking about this. Please do not use this site to report a crime. Call 999in an emergency, for all non-emergencies www.hampshire.police.uk. Comments that are...

We’re aware of reports made to us just before midnight on Sunday 6 December of a man in the Hamble area in possession of an offensive weapon who damaged a number of vehicles and made numerous threats to kill.

Our officers worked diligently to identify the suspect and as a result arrested a 23-year-old man from Hamble in the early hours of Tuesday morning on suspicion of possessing an offensive weapon, causing criminal damage and making threats to kill.

He has since been released on police bail while enquiries continue – with strict conditions placed upon him.

We wanted to reassure you that there is no identified risk to the wider community and we ask that anyone with information to please call 101, quoting 44200471543.

Alternatively, you can contact independent charity Crimestoppers anonymously on 0800 555 111.