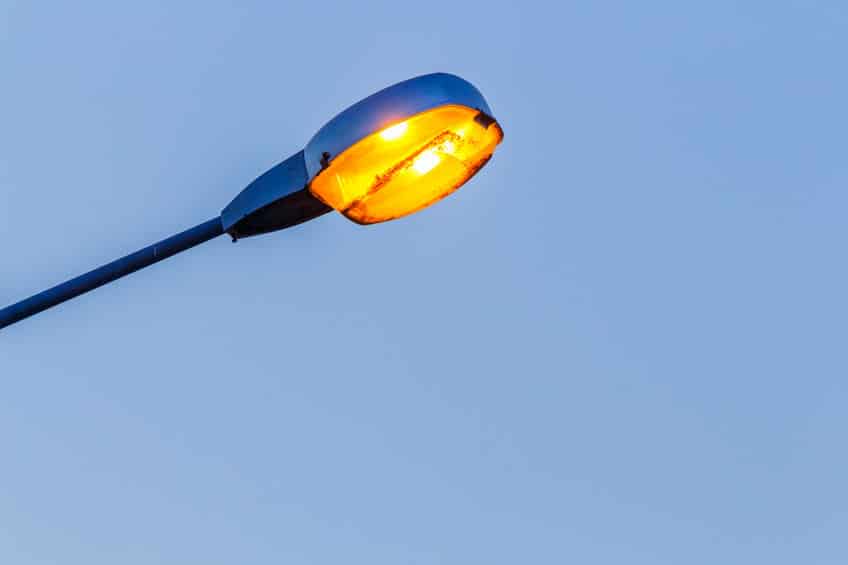 On April the 1st 2019, street lighting across Hampshire begun turning off nightly between 1am and 4am. Hampshire County Council claims the switch-off was to save an estimated £230,000 a year in electricity costs.

Ever since this was first raised there have been people arguing for, or against the switch off - but is this the wrong argument? I think so.

One frustrated Eastleigh resident started a petition to at the switch-off. 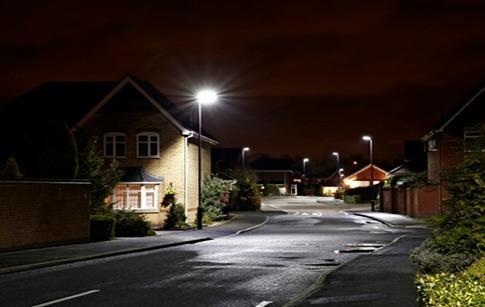 Hundreds back a "terrified" resident's petition to switch on the streetlights...

HUNDREDS of Eastleigh residents, as well as local councillors and an MP's have backed a campaign to have the street lights switched back on at night… 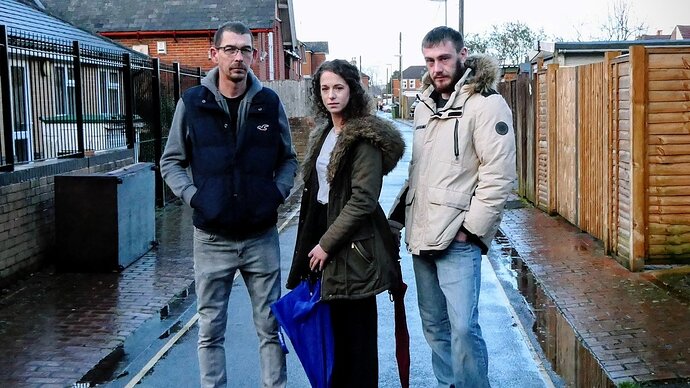 People on both sides of the street lighting issue have very good points. Is it better for the environment? Is it better on crime? It saves cash that the council can’t afford?

Whether you want the lights on or off likely depends a lot on where you live, and how secure you feel so of course people are going to respond differently. Some people remain entrenched in their binary views - but what about if we become more open minded, and opted for a more sponsor a lamp post kind of approach?

I think we should avoid the turning of “streetlights back on”, or “leave the street lighting off” discussion and look instead to a new solution. Let’s push the decision out to the very local community and away from central powers as high as Hampshire County Council.

The Street Lighting in Eastleigh and Hampshire is remotely controllable by the “MayFlower” street lighting control system. Remote staff at SSE have the ability to turn on and off, or control brightness of street lighting remotely. Each lamp is individually addressable!

According to this article below, the modern street lamps generally use 37W, whereas the new super efficient ones use 12W 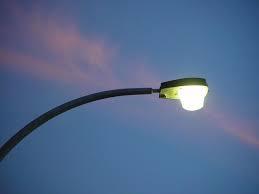 MORE streetlights in Hampshire will be upgraded in the new year as part of £3.2m investment to improve the county's carbon footprint.

So - by my rough worst-case calculations, each lamp costs less than £5 per year to run if it was run at full power, full time. Of course lights only turn on at night, and not to 100% power so the cost for an individual lamp must be cheaper.

Assuming £5 is worst case - this seems fairly cheap if individuals were enabled to sponsor their own local lamp if they want it on? I’m thinking a QR code on each lamp post, you can scan it and can see how long it is sponsored for.

Anyone with an interest in the lamp post could scan the QR code to receive updates, or participate in discussions to see if it should be on or off? Decisions could be made ultra-locally than by the old centrally managed decision for the entire-of-Hampshire approach. We should enable the local individual residents around the lamp post to decide.

Thoughts? am i being crazy?

- the technology to make all this possible is already in place! All that’s missing is the will.

Agreed with you on technology and devolving the control. We know that local authorities like Eastleigh borough council have to install and sign-off the street lighting - therefore, EBC holds the key to installing more cost effective lighting.

As usual it requires a mature middle ground approach which we’ve not seen to-date.

Both times I offered to work with each councillor or a solution that included smart lighting (or similar).

I really want to work with them to resolve this street light issue and improve safety for residents. I’m confident that EBC can take action that will then promote HCC action. 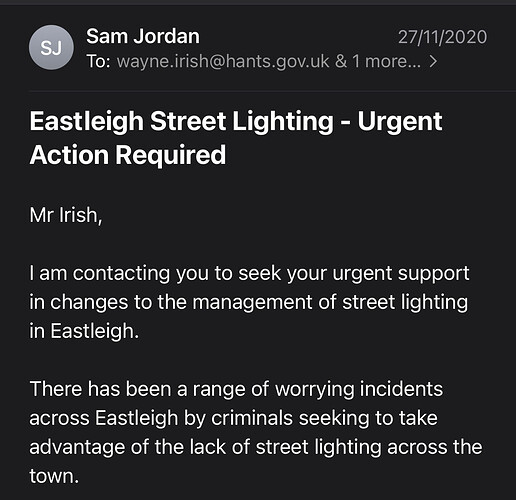 I have a little little more to add on this ‘sponsor a streetlamp’ idea. I’ve been thinking about how such a scheme could be implemented. I figure it would need a few phases to allow the change to come in seamlessly.

Ideally you would trial it in a small sample area with an open minded Borough Council, Parish council, and local residents. Likely with an area where people have been complaining heavily about it (Eastleigh, right?

It could be some residents prefer some existing lights OFF which have currently been left on. (Some lights have not been turned off overnight).

This could be done manually for the pilot due to the expected low volume of requests - however the strategic view should be to get an automated system in place where other humans only need to get involved if there is an objection. Ideally a user should be able to scan their lamps QR code, and get involved.

Stage 2 - More detailed control & advanced community
Using the same mechanisms implemented and tested in stage 1, you should then be able to slowly open up to control other properties:

The methods for deciding and arbitrating lamppost control could also be looked at. In my view, we should have a roadmap to creating a ‘community’ around the lamp post. This may sound dumb at first - but if you think about all the heated debates about this topic people on clearly feel passionate about whether it’s on and off.

No ones views are invalid - but the discussion is hard when you talk about a group of street lamps, as there are 100,000+ voices involved. If you get hyperlocal and talk about an individual lamp, you start talking sometimes about a group of 5-50 people that may possibly care which makes conversations much easier.

Climate change, environmental impact, energy saving, light pollution, security, crime prevention, all then become options for that local group of people to decide - and discuss together if they are interested. This has a massive benefit of bringing everyone into the conversation, rather than having things done to them.

There are fridge benefits of QR coding up every lamp post:

How would we deal with conflict, when people argue about what should be on and off?
There are many options on this:

What about people that can’t handle technology? Like most things today, there are options for that too.

Too often in today’s society we seem to have taken the power and responsibility away from the super local communities and centralised it far too much which has made people feel disconnected from local decisions. This would be a step to give some decision making power right back.

Really could be workable, encourage community decision making and so on.

Can’t see the Lib Dems engaging. What about the independent councillors in Bishopstoke?

Hi @afdy, this sounds like a really interesting idea! Is there and chance I could persuade you to add it to the Eastleigh Manifesto? (By coincidence I finally got round to writing a guide to the manifesto today.)

Ooh, i like the approach, nice idea! Done. Worthy of a separate new post to tell everyone about it.

Happy to write a separate post to see if anyone else has any ideas, or wants to comment on your proposal

Awesome, thanks! I actually meant post a topic here letting folk know your idea about the Eastleigh manifesto.

Apparently smart street lamps came up at The Things Conference this week. I wonder if other councils will go for more local decision making. Worth keeping a look out for other examples.

Interesting! Thing is i think most people are making a drumbeat about the need for ‘smart lighting’ when really that’s just a clever idea to get more money spent on a new project and new shiny things and new IoT sensors to detect things.

My frustration here is that the tech is already in place to make this happen, it just needs a smart central controller (and people) to make the decisions. Ultimately putting the power into the community and those local decisions is the complicated bit, the website and database is actually the easy bit here! The tech already in place behind the scenes controlling the existing lights is already smart.

The people bit is always more complicated than the technology bit!