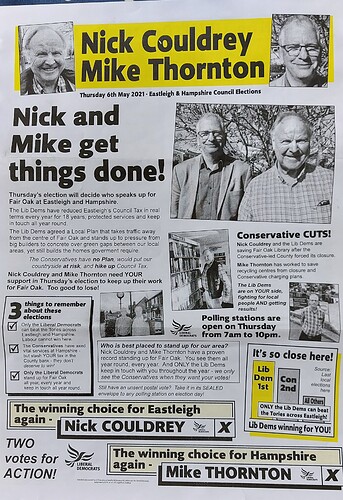 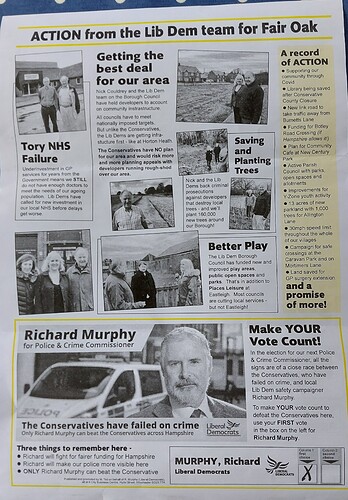 Thursday’s election will decide who speaks up for Fair Oak at Eastleigh and Hampshire.

The Lib Dems have reduced Eastleigh’s council tax in real terms every year for 18 years, protected services and keep in touch all year round.

The Lib Dems agreed a Local Plan that takes traffic away from the centre of Fair Oak and stands up to pressure from big builders to concrete over green gaps between our local areas, yet still builds the homes [SIC]goverment require

The Conservatives have no Plan, would put our countryside at risk and hike up Council Tax.

Nick Couldrey and Mike Thornton need YOUR support in Thursday’s election to keep up their work for Fair Oak. Too good to lose!

Nick Couldrey and the Lib Dems are saving Fair Oak Library after the Conservative-led County forced its closure.

Mike Thornton has worked to save recycling centres from closure and Conservative charging plans.

The Lib Dems are on YOUR side, fighting for local people AND getting results!

3 things to remember about these elections

Who is best placed to stand up for our area?

Nick Couldrey and Mike Thornton have a proven record standing up for Fair Oak. You see them all year round, every year. And ONLY the Lib Dems keep in touch with you throughout the year - we only see the Conservatives when they want your votes!

Published & promoted by A. Winstanley on behalf of M. Thornton, N. Couldrey and the Liberal Democrats, and printed by IVPS, all c/o 107 Leigh Road, Eastleigh.

Action for the Lib Dem Team from Fair Oak!

Tory NHS Failure
Underinvestment in GP services for years from the Government means we STILL do not have enough doctors to meet the needs of our ageing population. Lib Dems have called for new investment in our local NHS before delays get worse.

Getting the best deal for our area
Nick Couldrey and the Lib Dem team on the Borough Council have held developers to account on community [SIC]instrastructure.
All councils have to meet nationally imposed targets. But unlike the Conservatives, the Lib Dems are getting infrastructure first - like at Horton Heath.
The Conservatives have NO plan for our area and would risk more and more planning appeals with developers running rough-shod over our area.

Saving and planting Trees
Nick and the Lib Dems back criminal prosecutions against developers that destroy local trees - and we’ll plant 160,000 new trees around our Borough!

Better Play
The Lib Dem Borough Council has funded new and improved play areas, public open spaces and parks. That’s in addition to Places Leisure at Eastleigh. Most councils are cutting local services - but not Eastleigh!

A record of ACTION

Make YOUR Vote Count!
In the election for our next Police & Crime Commissioner, all the signs are of a close race between Conservatives, who have failed on crime, and local Lib Dem safety campaigner Richard Murphy.
To make YOUR vote count to defeat the Conservatives here, use your FIRST vote in the box on the left for Richard Murphy.

Published and promoted by M. Tod on behalf of R. Murphy (Liberal Democrats),
all at 9 City Business Centre, Hyde Street, Winchester, SO23 7TA

OMG another one! Which forest was erased for this election?

2 spelling mistakes in it as well - not that I’m a pedant!!