How to encourage voters?

Ensure everyone gets the right paper(s) for one
(Sorry, just coming off the debate on eastleigh neighbours! Lol)

I do think apps and pages like the ones @afdy has set up help, even if they do get dismissed as Tory Spin! Lol

Also, there needs to be a very clear explanation of what EBC do, and what HCC do. Many people on my HCC results post are complaining about issues that are wholly in EBCs domain.

Good question, I’ve struggled with this myself and have some random ideas/thoughts, I’m not convinced on all of them, but they’re good brainfart starter for tens:

Also, there needs to be a very clear explanation of what EBC do, and what HCC do. Many people on my HCC results post are complaining about issues that are wholly in EBCs domain.

Agree, here - people seem very confused on the difference between different layers of government and what they’re actually voting for. Perhaps the voting form, polling card, and polling stations should EXPLAIN what people are voting for and give them some information?

Forums like this are great, and a lot of people have read some content however this only captures people who are actively researching

Are they still that great when the Council Leader dismisses them as Spin, and other comments say its a Tory mouthpiece?

Absolutely, as it allows the open google indexable and researchable conversation.

Council Leader Keith House dismissed it as spin as it suited his agenda at the time, because it was referencing an anti-lib dem post and he’s not in control of it. I note he first asked for evidence of lib dem lies, and manipulation- then when i gave him the evidence-based post on here he dismissed it as spin. He never answered or acknowledged the claims. Standard slippery avoidance and dismiss tactic.

One day it will be labour, next day tory spin, or whatever suits someone’s motive at the time.

The site has no specific agenda apart from enabling the open fair conversation… Individuals posting however may have an agenda.

The other comments were actually about facebook page posts rather than this forum (separate off-topic issue).

I know, just pulling your leg

Everyone getting correct papers stop putting 2 votes in 1 envelope should all be separate they are when you go to polling station so should be the same for postal.

Make it clearer for youger generations and upcoming generations let them know why its important what impact they can have.

Covid friendly these days but lay on some info events through out some free pen or goodie bags to attract people everyone loves a freebie and at the same time they can learn and pick up information and who knows may even inspire people to get into politics.

Remember the older generation they dont all have whizzy computers and phones make those leaflets attractive so they dont end up in the bin.

The fact that the Conservatives basically “gave up” on Central isn’t that great for democracy. At least while Mr Irish was unwell, @TParkEastleighN was still getting his name out there in leaflets.

It would’ve been nice for all candidates to truly represent the ward they stand in, and be subjected to the same triumphs and struggles as the residents of that ward are.

I could go on

Please do… and welcome to the community!!

Remember the older generation they dont all have whizzy computers and phones make those leaflets attractive so they dont end up in the bin.

They will anyway. Many people don’t like unsolicited things through their mailbox.

We tried to do an online Hustings thing - to get people to debate each other on a Zoom call rather than just out-leaflet each other. But it fell flat. Any idea how else it could be more exciting?

Welcome!! Glad to have you here!

I actually don’t think people know what councillors do!

And communication between candidates can be so rude that people become disengaged.

My other half said…I never vote because what difference does it make? Well today I saw that if 6 more households voted in a ward the outcome would be different (potentially)

But if people knew what a councillor can do for the community perhaps they would vote???

Get every Candidate on here:

Wouldn’t it be great to have all candidates here, or even all Councillors?

I recall @Alexbourne saying that Wayne didn’t know about this forum, and @jtonline saying he didn’t know how to get hold of Mr Sukhdev Raj.

Wouldn’t it be great if somehow there was a drive from us to get everyone on here.
Also we may need to decide if this is the forum, or EBLP on Facebook. So far, I prefer this one (FB has too many bugs!)

So both of those candidates I know how to get hold of! Agree this is a better forum than FB!!

Some sort of hustings?

The big ones for me are better journalism, and candidates setting a better example for political discussions.

Eastleigh News had a good spell for interviewing candidates a while ago but it hasn’t been as active recently which is a real shame. Hopefully the new local democracy reporters might help a bit.

One slightly wild idea I’ve been wondering recently is whether there’s any chance of crowd funding some sort of party neutral local politics 101 course, with the aim to encourage more candidates, and better election campaigns. It’s in our best interests to be represented by someone who can do the job well whichever party they represent.

There’s no one answer so anything anyone does will help. Actually feeling a bit more positive after years of very lonely gentle prodding with ESLHustings on Twitter!

Another way -
change the way we address Councillors

I’m just wondering how many people got tired of the Lib Dem bashing on Eastleigh Neighbours. Whether we like it or not, the LDs are in

I get it, they have their failings. But wouldn’t it be best to be seen working with the Council, like this?

And not just the big ones i.e. SOU Airport or Allington. Let everyone see how much this council and the Councillors they elected work (or not) for them.

I don’t think the leading-party bashing is unique to the group. I think this is mainly because party politics become involved so people become overly passionate about it. That’s a whole other separate topic!

I also don’t think it’s as simple as your screenshot makes out:

There’s a positive for publishing all decisions and meetings every month though - it is all there, its published on the council website!

The council do do this, and they do publish bitesize announcements on their facebook and twitter accounts, and news page. I think this has improved drastically in recent years.

I do think an external body could ‘humanify’ the communications and decision making there though and say for example post it here which could be shared and engaged with so people could openly discuss it. This links back to the point made by @jtonline of improved journalism. If you know of anyone who would be interested in doing something, get them in touch

I kicked off a news aggregator for Eastleigh a while back which has sat quietly humming not doing much: 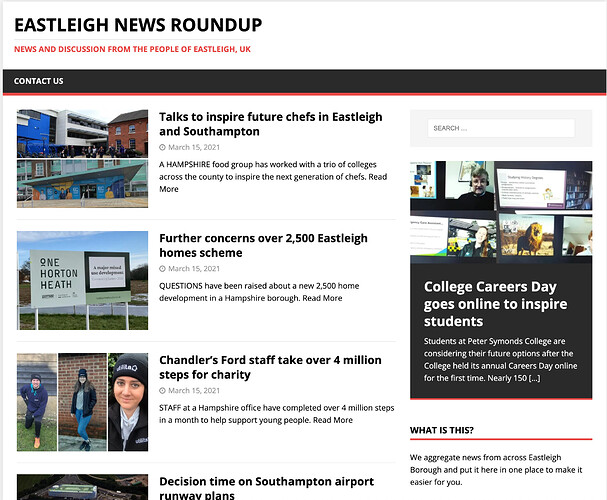 News and Discussion from the people of Eastleigh, UK

I love the idea of a neutral local politics 101 course, something hopefully all parties could get behind. Finding people to run such a thing would be challenging as anyone who becomes politically aware instantly is accused of bias.

I also think some sort of agreed guidance and operating ‘pact’ between candidates could help if implemented by an impartial body. i.e. “Don’t attack each-other”, “Don’t fuel hate”, “Don’t lie”, “Don’t manipulate and mislead”, “be responsive”, “be open to public debate”. The impartial body could then put up guidance containing all the candidates they publicly endorse?

Wouldn’t it be great if somehow there was a drive from us to get everyone on here.
Also we may need to decide if this is the forum, or EBLP on Facebook. So far, I prefer this one (FB has too many bugs!)

Agree, I think this platform offers a much superior alternative for serious debate. Facebook focusses on encouraging users to comment, and constant engagement. This software mainly focuses on helping the transparent discussion, I think the reader to writer ratio on here is like 1000:1, whereas facebook it is much lower.

Wowsers, welcome aboard @Unicornwonders! Brilliant first post, loved almost everything you said! “I could go on…” - don’t let us stop you - keep going!!

Only issue I could see would be on the goodiebags and free pens - candidates aren’t rich! I’m sure some are broke and have no money to fund such things. That and waste of course.

It also gives more bias towards party politics than individuals with no finance. Agree though it would probably get people involved!

As to election build up - great idea! I’m sure candidates would love that build up to be made… the thing is its on us the community to help generate that build up. Candidates by default are isolated and on their own. Together, we could make something happen that candidates could get behind?