We as a human race currently build like there is an unlimited land supply. What do you think we need to start doing to reduce the pace of our land development, and how long do you think we have to do it?
ACulley (Alexander Culley) 7 April 2021 21:13 #2

This is a huge question, honestly hard to know where to start.

According to data cited by Rosner et.al. (2013, revised 2019) global population growth is actually falling. However, it probably doesn’t feel that way if you reflect on this table: 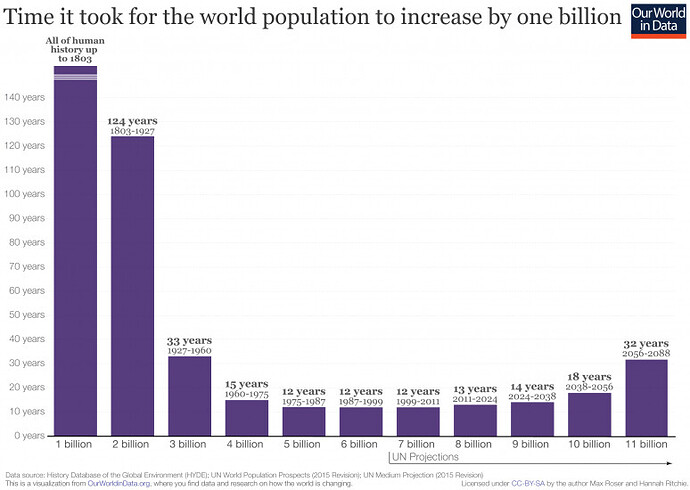 The UK population is projected to continue to grow further. The population growth in England alone between mid 2018-19 was 310,000 people, see the Office for National Statistics:

Overview of the UK population - Office for National Statistics.

To put this in perspective, Southampton’s city/unitary authority population in 2018 was reportedly 269,781.

This is far bigger than local government. All humble councillors could do is to try and select sites that would be the least destructive (e.g. brownfield, there a few of these in Eastleigh per the Local Area Plan) and/or build high…

It is up to national government to examine the bigger picture. An unenviable task on so many levels.

Thanks for the delayed reply Alex! Appreciated! It is a massively difficult topic and one which is likely going to plague us all for the next 50 years or so!

Do you really think it starts with central government alone, or could some opportunities start local?

We seem to keep carrying on as we are - I don’t see any plan to change… yet our growth and consumption we know for a fact is unsustainable.

At the moment the house building majority seems to be 3-4 bed houses, do we need to start considering building alternative styles of community accommodation?

Someone needs to get imaginative at some point…

I used to live in Basingstoke in one of the big blocks of flats in the town centre - Crown Heights. You may have heard of it as it has been in the news lately about cladding.

Crown Heights is a classic attempt to build high to accommodate a lot of people in one place, away from the green belt. Supposedly good for commuters too. Inside, the flats weren’t bad. However, outside they were an eyesore, painted in a ridiculous colour, dominating the skyline. It was also designed in ‘horseshoe’ shape, so noise used to travel upwards and create some terrible echoes. The public space at the bottom often attracted anti-social behaviour, with some really nasty incidents and some places that were not well lit. Then you had parking issues and neighbour spats over noise, pidgeons on balconies and all the rest…I was often kept awake at night by the noise and my wife felt threatened by the violence. Unfortunately, I think a lot of ‘inventive’ town planning like this ends up becoming a nightmare and very bad for people’s mental wellbeing.

There are some lovely apartments of course, but many of them end up getting ‘gated’ and are extremely expensive for what you get - loads of these in London near the Thames. I’m not sure these would be within reach of the majority of the population…

So that leaves the greenbelt or a few brownfield areas that can accommodate these new houses, some of which we have in central Eastleigh. Personally, I think a family needs a bit of headspace, a garden of some sort.

Whilst I am all for creative thinking, I truly believe that councillors of whatever political persuasion are in a massive bind here. Some ‘creativity’ (like the horrendous brutalist architecture that went up in the 60s and can be seen in many British cities) can lead to huge social problems that were perhaps not envisaged at the time. The less creative, but perhaps more socially cohesive, approach is to build on the greenbelt.

Personally, I love the UK’s countryside so really do not like this continued development. However, if central government isn’t going to address population growth (political dynamite) then councillors will be stuck with trying to choose the least damaging option.