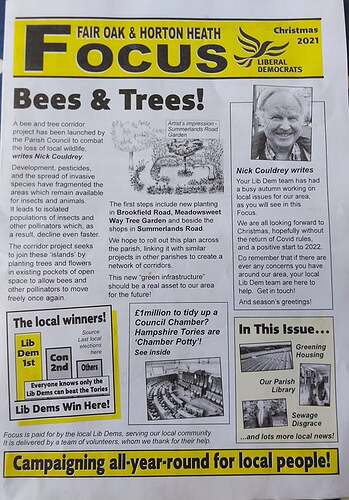 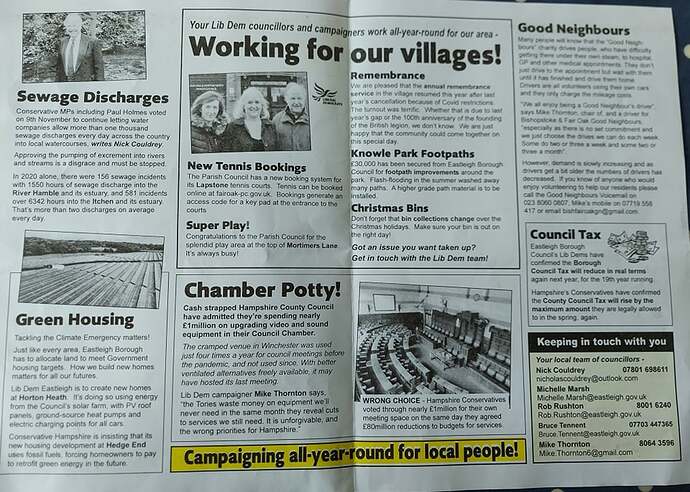 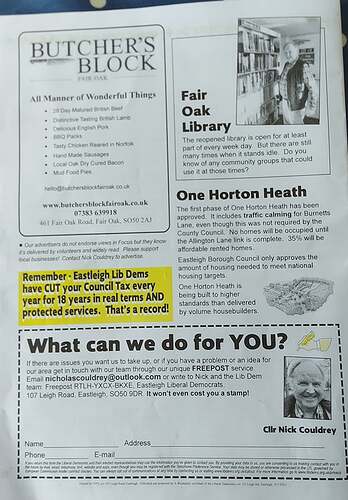 Bees & Trees!
A bee and a tree corridor project has been launched by the Parish Council to combat the loss of wildlife, writes Nick Couldrey.
Development, pesticides, and the spread of invasive species have fragmented the areas which remain available for insects and animals. It leads to isolated populations of insects and other pollinators which, as a result, decline even faster.
The corridor project seeks to join these ‘islands’ by planting trees and flowers in existing pockets of open space to allow bees and other pollinators to move freely once again.
The first steps include new planting in Brookfield Road, Meadowsweet Way Tree Garden and beside the shops in Summerlands Road.
We hope to roll out this plan across the parish, linking it with similar projects in other parishes to create a network of corridors.
This ‘green infrastructure’ should be a real asset to our area for the future!

*£1million to tidy up a Council Chamber? *
Hampshire Tories are ‘Chamber Potty’!
See inside

Nick Couldrey writes
Your Lib Dem team has had a busy autumn working on local issues in our area, as you will see in this Focus.
We are all looking forward to Christmas, hopefully without the return of Covid rules, and a positive start to 2022.
Do remember that if there are ever any concerns you have around your area, your local Lib Dem team are here to help. Get in touch!
And season’s greetings!

Focus is paid for by the local Lib Dems, serving our local community. It is delivered by a team of volunteers, whom we thank for their help.

Sewage Discharges
Conservative MPs including Paul Holmes voted on 9th November to continue letting water companies allow more than one thouosand sewage discharges every single day across the country into local watercourses, writes Nick Couldrey.
Approving the pumping of excrement into rivers and streams is a disgrace and must be stopped.
In 2020 alone, there were 156 sewage incidents with 1550 hours of sewage discharge into the River Hamble and its estuary, and 581 incidents over 6342 hours into the Itchen and its estuary. That’s more than two discharges on average every day.

Green Housing
Tackling the Climate Emergency matters!
Just like every area, Eastleigh Borough has to allocate land to meet Government housing targets. How we build new homes matters for all our futures.
Lib Dem Eastleigh is to create new homes at Horton Heath. It’s doing so using energy from the Council’s solar farm, with PV roof panels, ground source heat pumps and electric charging points for all cars.
Conservative Hampshire is insisting that its new housing development at Hedge End uses fossil fuels, forcing homeowners to pay to retrofit green energy in the future.

Your Lib Dem councillors and campaigners work all-year-round for our area -
Working for our villages!

New Tennis Bookings
The Parish Council has a new booking system for the Lapstone tennis courts. Tennis can be booked online at fairoak-pc.gov.uk. Bookings generate an access code for a keypad at the entrance to the courts.

Super Play!
Congratulations to the Parish Council for the splendid play area at the top of Mortimers Lane. It’s always busy!

Remembrance
We are pleased that the annual remembrance service in the village resumed this year after last year’s cancellation because of Covid restrictions. The turnout was terrific. Whether that is due to last year’s gap or the 100th anniversary of the founding of the British Legion we don’t know. We are just happy that the community could come together on this special day.

Knowle Park Footpaths
£30,000 has been secured from Eastleigh Borough Council for footpath improvements around the park. Flash-flooding in the summer washed away many paths. A higher grade path material is to be installed.

Christmas Bins
Don’t forget that bin collections change over the Christmas holidays. Make sure your bin is out on the right day!

Got an issue you want taken up?
Get in touch with the Lib Dem team!

Chamber Potty!
Cash strapped Hampshire County Council have admitted they’re spending nearly £1million on upgrading video and sound equipment in their Council Chamber.
The cramped venue in Winchester was used just four times a year for council meetings before the pandemic, and not used since. With better ventilated alternatives freely available, it may have hosted its last meeting.
Lib Deb campaigner Mike Thornton says, “the Tories waste money on equipment we’ll never need in the same month they reveal cuts to services we still need. It is unforgivable, and the wrong priorities for Hampshire.”
WRONG CHOICE - Hampshire Conservatives voted through nearly £1million for their own meeting space on the same day they agreed £80million reductions to budgets for services.

Good Neighbours
Many people will know that the “Good Neighbours” charity drives people, who have difficulty getting there under their own steam, to hospital, GP and other medical appointments. They don’t just drive to the appointment but wait with them until it has finished and drive them home. Drivers are volunteers using their own cars and they only charge the mileage costs.
“We all enjoy being a Good Neighbour’s driver”, says Mike Thornton, chair of, and driver for, Bishopstoke & Fair Oak Good Neighbours, “especially as there is no set commitment and we just choose the drives we can do each week. Some do two or three a week and some do two or three a month”.
However, demand is slowly increasing and as drivers get a bit older the number of drivers has decreased. If you know anyone who would enjoy volunteering to help our residents please call the Good Neighbours Voicemail on 023 8060 0807, Mike’s mobile on 07719 558 417 or email bishfairoakgn@gmail.com.

Fair Oak Library
The reopened library is open for at least part of every day of the week. But there are still many times when it stands idle. Do you know of any community groups that could use it at those times?

One Horton Heath
The first phase of One Horton Heath has been approved. It includes traffic calming for Burnetts Lane, even though this was not required by the County Council. No homes will be occupied until the Allington Lane link is complete. 35% will be affordable rented homes.
Eastleigh Borough Council only approves the amount of housing needed to meet national housing targets.
One Horton Heath is being built to higher standards than delivered by volume housebuilders.

Remember - Eastleigh Lib Dems have CUT your Council Tax every year for 18 years in real terms AND protected services. That’s a record!

What can we do for YOU?
If there are issues you want us to take up, or if you have a problem or an idea for our area get in touch with our team through our unique FREEPOST service. Email nicholascouldrey@outlook.com or write to Nick and the Lib Dem team: Freepost RTLH-YXCX-BKXE, Eastleigh Liberal Democrats, 107 Leigh Road, Eastleigh, SO50 9DR. It won’t even cost you a stamp!
Cllr Nick Couldrey

If you return this form the Liberal Democrats and their elected representatives may use the information you’ve given to contact you. By providing your data to us, you are consenting to us making contact with you in the future by mail, email, telephone, text, website and apps, even though you may be registered with the Telephone Preference Service. Your data may be stored or otherwise processed in the US, governed by European Commission model contract clauses. You can always opt out of communications at any time by contacting us or visiting www.libdems.org.uk/optout. For more information go to www.libdems.org.uk/privacy