We’ve been monitoring Eastleigh Borough Council and the trees in our borough. Something didn’t look right so we had a look under the surface.

Since 2004, it’s been a legal requirement to track tree felling by councils. I raised a Freedom of Information request to see the numbers. Eastleigh Borough Council confirmed they have not kept records of trees they have felled and only started to recently.

This raises lots of questions:

You can read the full piece including the FOI request here: Lib Dem council fails to track tree felling in Eastleigh. This is illegal.

As a resident, let me know what you think and whether you believe it’s worth looking in to this further.

Where possible, providing the location of the removed trees would also be requested.

All information should be provided digitally and no physical copies of the data is required.

Our tree officer has advised that we do not hold records of the trees we remove and it would be impossible to provide accurate figures.

Last year the Council invested in a new computer system and EBC tree locations/health assessments are being recorded onto it slowly.

In most cases tree removal would be recommended if a tree was dead or identified with a disease such as Ash Die Back.

If you require any further information relating to trees, please contact us at trees@eastleigh.gov.uk”

@Alexbourne , as you’ve made a post on EBLP and Sam’s one is on EN, you’re missing each other. Why not discuss it here? 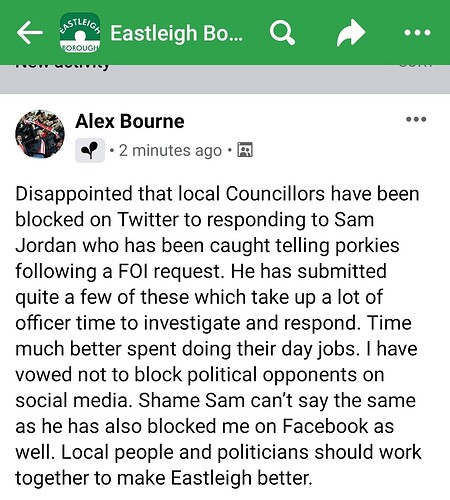 Happy to do so. It’s documented here, tracked and available for the entire world to see. Every single comment, FOI and post.

Why am I not surprised that the Lib Dems don’t like people asking questions?

Thanks for tying some of the threads together here @DazzaRPD

I’m old enough to remember when Sam said, “nobody is limited from engaging with me on Facebook or any other platform” - he’s even limited replies on twitter this time as well as blocking people, which makes it even more difficult to have a sensible discussion.

Fwiw, I think it’s absolutely right that people submit FOI requests and officers spend time replying- that is part of their day jobs. The PPE situation at a national level should show why this is so important and it’s a false economy to claim otherwise. As for the tree thing,

, I guess we’ll see but tbh I don’t particularly trust Sam’s presentation of these kind of stories even when there is a kernel of truth in them.

You always know when you’ve uncovered something because the Lib Dems (and their supporters James et al) come out fighting;

Thankfully, it’s water off a ducks back for me and I’ll keep digging and exposing the Lib Dem failure.

My hits so far for your reference: 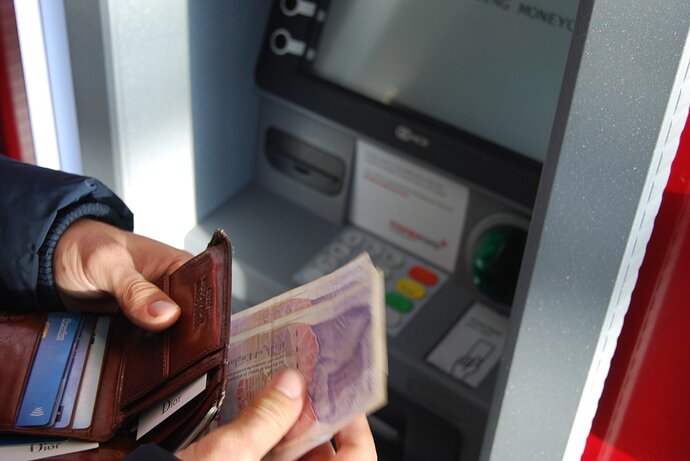 What do Neil Diamond, Bryan Adams and English cricket have in common?

What do Neil Diamond, Bryan Adams and English cricket have in common? They were all free tickets provided to this Eastleigh politician. 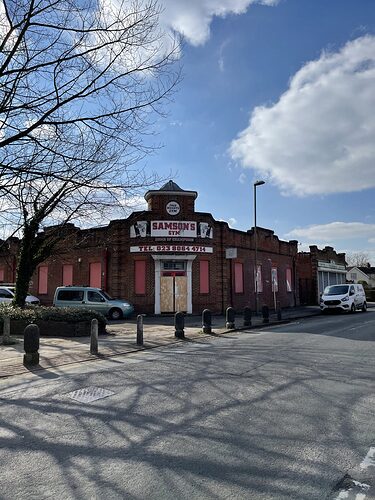 The fight to save Eastleigh's heritage continues. This is the latest update.

The fight to save the Eastleigh's heritage continues. Some progress has been made but more work is needed to make sure it's protected. 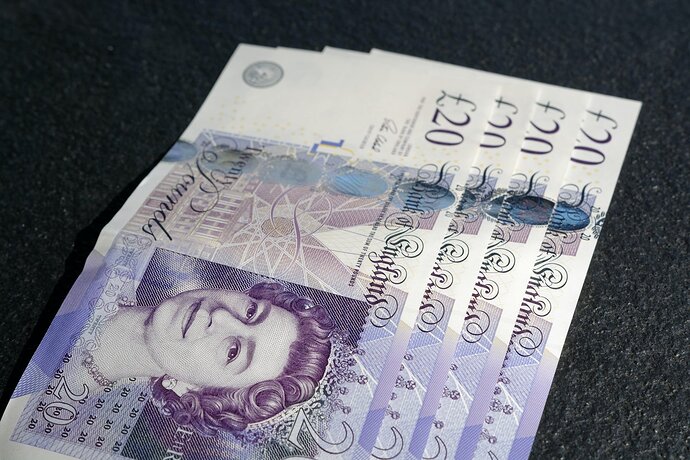 This is how much Eastleigh's council wastes on operational failure 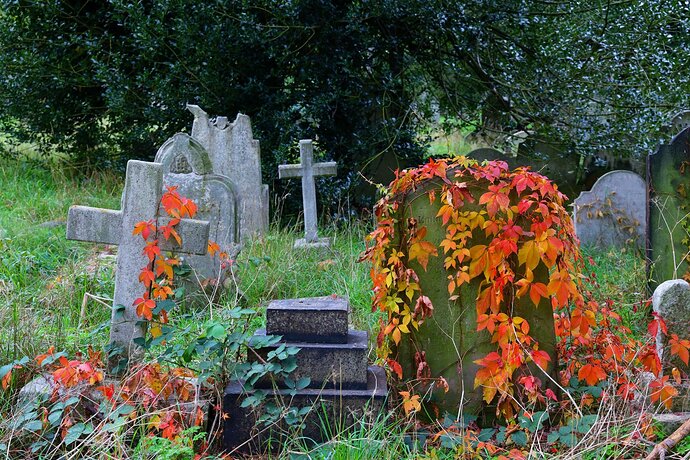 More Stealth Taxes: the Liberal Democrats are cashing in on burial fees during the pandemic - Eastleigh Labour Party will not accept this 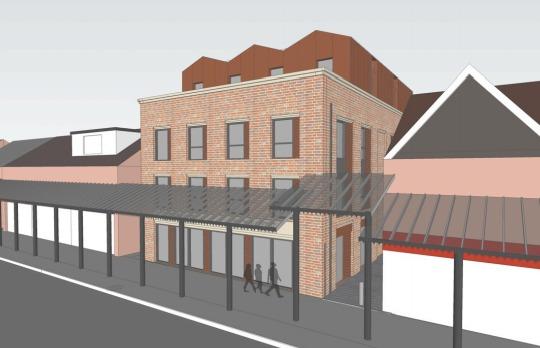 Another historic Eastleigh building to be destroyed by Councillors

Eastleigh's historic buildings, the post office and sorting house, are being destroyed and replaced with inadequate flats under council plans 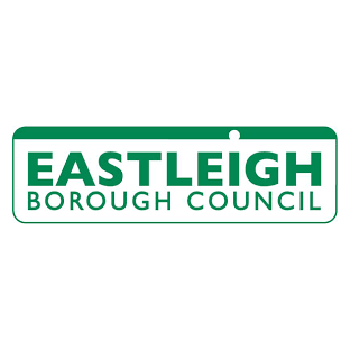 Eastleigh Borough Council Consultants Fees: where has the money gone?

Thanks for tying some of the threads together here @DazzaRPD

I had to, it seems to be the only way to bring all sides together, Facebook glitches etc. notwithstanding.

Also it’s about the Council, and posts often get blown away on Facebook, so figured it’s probably best to have it here anyway.

You can see the entire Freedom of Information request above and associated information. People can make up their own minds.

You Lib Dems (and supporters i.e James) need to just do a better job and stop taking Eastleigh residents for fools.

You can see the entire Freedom of Information request above and associated information. People can make up their own minds.

They can’t see your post, for whatever reason, and have made their own on EBLP expressing disappointment. Both posts have 20-ish comments.

Would it not have been better to have this debate in a single thread? Unfortunately here isn’t as viral as Eastleigh Neighbours

It’s much better here - all the information here is available to search on the internet. It’s much more transparent for local people and you don’t need to be a part of Facebook or the forum to view it.

It’s all open, all transparent and all recorded.

He knows this very well.

It’s getting late and, to be honest, I’m not interested in a slanging match. 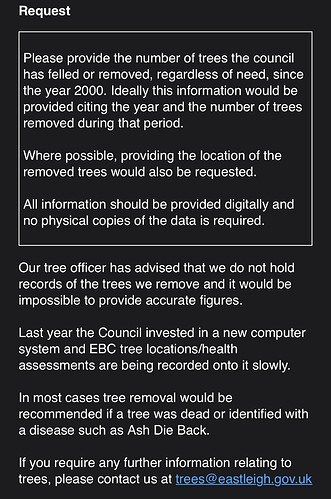 Foi is above, article covers the details.

I’ll follow-up to see what actions have been taken by the council to prevent this in the future.

The reason I don’t trust Sam is because of the way he twists the truth like this. He has limited who can engage with him about the alleged illegal tree felling on twitter by restricting replies to people he follows or mentions. Not being transparent about the ways he restricts open debate online just reduces his credibility and undermines his campaigns in my view.

As for being a Lib Dem supporter, I agree with them on some things, and disagree on others. They have some good candidates, and some less good. Same with most parties. I sometimes vote Lib Dem, I’ve lost count of the number of ballots I spoilt, I’ve voted for more than one party on the same day, I voted Labour in the last general election (I swapped my vote- quite impressed with the Labour MP I helped elect so far), and I even seriously considered joining the Labour party a while back (it was a moment of weakness, I’m still much happier not being a member of any party).

If you would like my vote, demanding it, making accusations about my motives, being negative, blocking me, etc. etc. probably won’t help. (Although I would still vote for you if you were the least worst option!)

It would be awesome if all local politicians could be more positive, focus on the issues, avoid personal attacks, and be a bit more honest. Tvm.

(Not keen on the voteSamGetTory hashtag either btw.)

To help keep this forum useful to passive readers (many more than posters!) can I ask we keep this thread on topic? “EBC break the law on tree felling”.

We do have another separate thread about politicians blocking people so it would be worth taking that very separate discussion over there so as to not repeat:

To block or not to block, that is the question Eastleigh Politics

Cross Post from Facebook courtesy of @TParkEastleighN "Should politicians block their opponents on Social Media? I’ve committed to never block anyone on SM unless they’ve been abusive and/or threatening to me or my family, that applies not only to my political opponents but also anyone else. I feel all politicians should make similar commitments. The blocking of your opponents is especially pernicious because that allows them to post anything they wish about a person/party without giving the…

On a separate tree felling FOI back in 2019 Eastleigh Borough council responded with:

According to our records the following number of trees were felled on Eastleigh Borough Council owned land.

According to our records the following number of trees were planted on Eastleigh Borough Council owned land.

Council owned trees generally do not have tree preservation orders on them.

We do not record the whether a tree is exceptional as this is very subjective.

Trees are removed if deemed essential for purposes of health and safety.

EBC only have to keep records of removed trees on land EBC owns not other peoples land. This has been explained to Sam but he either chooses to ignore it or doesn’t understand it. This is why EBC have not broken any legislation and why Sam’s posts all over Twitter and FB are inaccurate to say the least.

This is painful… this is what the FOI says. People can make their own choice.