Hit the blue reply button if you have feedback. 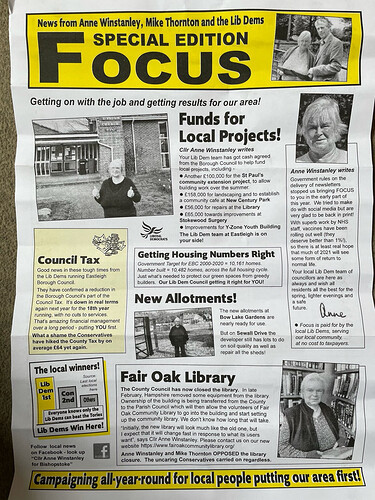 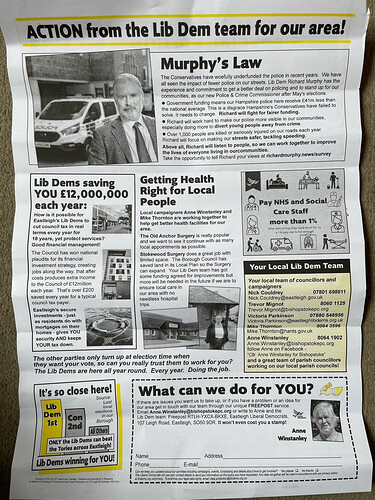 Getting on with the job and getting results for our area!

Your local Lib Dem team has got cash agreed from the Borough Council to help fund local projects, including -

The Lib Dem team at Eastleigh is on your side.

Getting Housing Numbers Right
Government Target for EBC 2000-2020 = 10,161 homes.
Number built = 10,482 homes, across the full housing cycle. Just what’s needed to protect our green spaces from greedy builders. Our Lib Dem Council getting it right for YOU!

New Allotments
The new allotments at Bow Lake Gardens are nearly ready for use.

But on Sewall Drive the developer still has lots to do on soil quality as well as repair all the sheds!

Fair Oak Library
The County Council has now closed the library. In late February, Hampshire removed some equipment from the library. Ownership of the building is being transferred from the County to the Parish Council which will then allow the volunteers of Fair Oak Community Library to go into the building and start setting up the community library. We don’t know how long that will take.

“Initially, the new library will look much like the old one, but I expect that it will change fast in response to what its users want”, says Cllr Anne Winstanley. Please contact us on our new website. https://www.fairoakcommunitylibrary.org

Anne Winstanley and Mike Thornton OPPOSED the library closure. The uncaring Conservatives carried on regardless.

They have confirmed a reduction in the Borough Council’s part of the Council Tax. Its down in real terms again next year for the 18th year running, with no cuts to services.

What a shame the Conservatives have hiked the County Tax by on average £64 yet again.

Anne Winstanley writes
Government rules on the delivery of newsletters stopped us bringing FOCUS to you in the early part of this year. We tried to make do with social media but are very glad to be back in print!

With superb work by NHS staff, vaccines have been rolling out well (they deserve better than 1%!), so there is at least real hope that much of 2021 will see some form of return to normal life.

Your local Lib Dem team of councillors are here as always and wish all residents all the best for the spring, lighter evenings and a safe future.

Murphy’s Law
The Conservatives have woefully underfunded the police in recent years. We have all seen the impact of fewer police on our streets. Lib Dem Richard Murphy has the experience and commitment to get a better deal on policing and to stand up for our communities, as our new Police & Crime Commissioner after May’s elections.

Lib Dems saving YOU £12,000,000 each year
How is it possible for Eastleigh’s Lib Dem’s to cut council tax in real terms every year for 18 years, yet protect services?

This Council has won national plaudits for its financial investment strategy, creating jobs along the way, that after costs produces extra income to the Council of £12million each year. That’s over £200 saved every year for a typical council tax payer.

Eastleigh’s secure investments - just as residents do with mortgages on their homes - gives YOU security AND keeps YOUR tax down.

Getting Health Right for Local People
Local campaigners Anne Winstanley and Mike Thornton are working together to help get better health facilities for our area.

The Old Anchor Surgery is really popular and we want to see it continue with as many local appointments as possible.

Stokewood Surgery does a great job with limited space. The Borough Council has saved land in its Local Plan so the Surgery can expand. Your Lib Dem team has got some funding agreed for improvements but more will be needed in the future if we are to ensure local care in our area with no needless hospital trips. 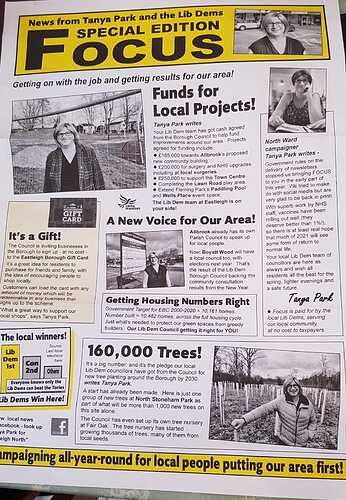 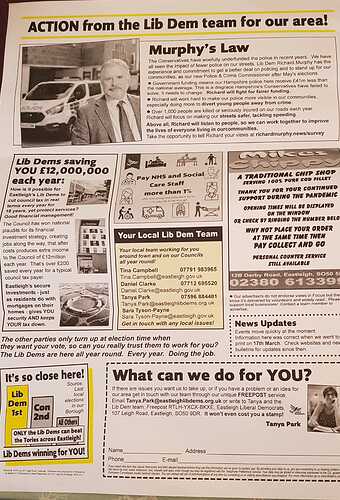 FUNDS FOR LOCAL PROJECTS
Ranya Park writes:
Your Lib Dem team has got cash agreed from the Borough Council to help fund improvements around our area. Projects agreed for funding include:

A NEW VOICE FOR OUR AREA
Allbrook already has its own Parish Council to speak up for local people.

Now, Boyatt Wood will have a local council too, with elections next year. That’s the result of the Lib Dem Borough Council backing the community consultation results from the New Year.

ITS A GIFT
The Council is inviting businesses in the Borough to sign up - at no cost - to the Eastleigh Borough Gift Card.

It’s a great idea for residents to purcahse for friends and family, with the idea of encouraging people to shop locally.
Customers can load the card with any amount of money which will be redeemable in any businesses that signs up to the chsme.
“What a great way to support our local shops”, says Tanya Park.

1600,000 TREES
It’s a big number and its the pledge our local Lib Dem councillors have got from the Council for new tree planting around the Borough by 2030 writes Tanya Park.

A start has already been made. Here is just one group of new trees at North Stoneham Park as part of what will be more than 1,000 new trees on this site alone.

The Council has even set up its own tree nursery at Fair Oak. The tree nursery has started growing thousands of trees, many of them from local seeds. 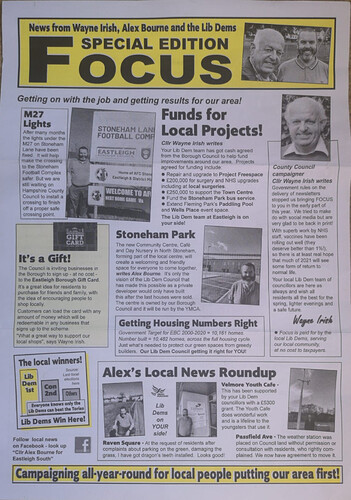 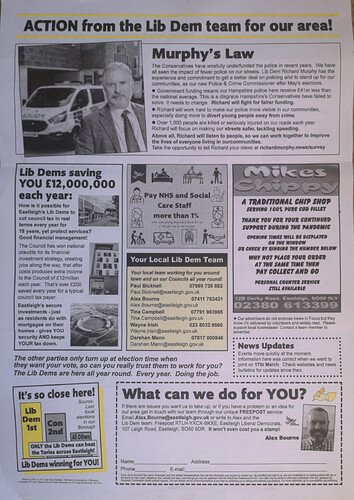 M27 LIGHTS
After many months the lights under the M27 on Stoneham Lane have been fixed. It will help make the crossing to the Stoneham Football Complex safer. But we are still waiting on Hampshire County Council to install a crossing to finish off a proper safe crossing point.

FUNDS FOR LOCAL PROJECTS
Cllr Wayne Irish writes:
Your Lib Dem team has got cash agreed from the Borough Council to help fund improvements around our area. projects agreed for funding include:

STONEHAM PARK
The new community centre, cafe and day nursery in North Stoneham forming part of the local centre, will create a welcoming and friendly space for everyone to come together, writes Alex Bourne. It’s only the vision of the Lib Dem Council that has made this possible as a private developer would only have built this after the last houses were sold. The centre is owned by our Borough Council and it will be run by the YMCA. 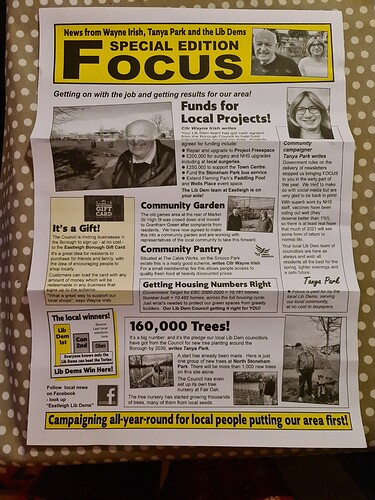 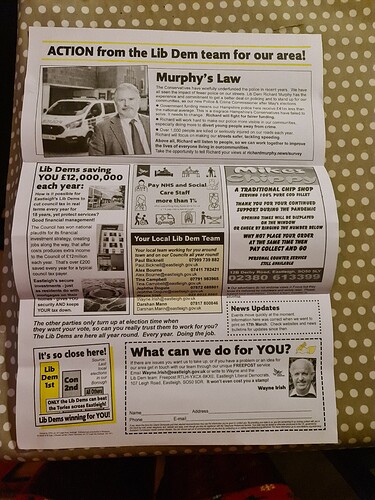