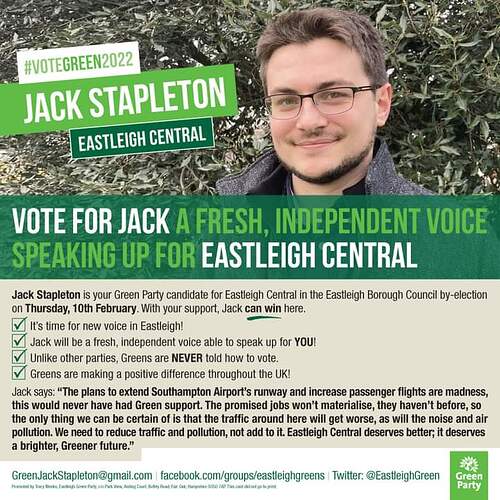 VOTE FOR JACK A FRESH, INDEPENDENT VOICE SPEAKING UP FOR EASTLEIGH CENTRAL

Jack Stapleton is your Green Party candidate for Eastleigh Central in the Eastleigh Borough Council by-election on Thursday, 10th February. With your support, Jack can win here.

It’s time for new voice in Eastleigh!
Jack will be a fresh, independent voice able to speak up for YOU!
Unlike other parties, Greens are NEVER told how to vote.
Greens are making a positive difference throughout the UK!

Jack says: “The plans to extend Southampton Airport’s runway and increase passenger flights are madness, this would never have had Green support.
The promised jobs won’t materialise, they haven’t before, so the only thing we can be certain of is that the traffic around here will get worse, as will the noise and air pollution.
We need to reduce traffic and pollution, not add to it. Eastleigh Central deserves better, it deserves a brighter, Greener future.”