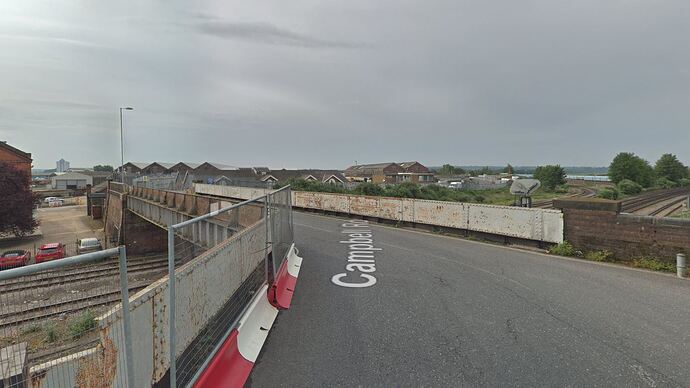 Eastleigh bridge set to be 'strengthened' thanks to £1.14m contribution from...

OVER £1m is set to be contributed towards the upgrade of a bridge in Eastleigh.

It looks like a missed opportunity by the Council and Network Rail. That bridge is overused by large lorries visiting the works and by residental traffic, the road surface is terrible too.
The two main issues are width and angle of the road. It is too sharp on both approaches, being literally 90 degree bends and the bridge isn’t wide enough for proper 2-way traffic and pedestrian or cyclists. There is no pavement for the majority of Campbell Road.

The solution is to do it properly. The angle of the bridge needs to be reduced which can be solved by slewing the angle of the bridge. A wider new bridge would ensure it is future-proofed by adding a proper pavement. Network Rail have the land for it and to widen the current road to ensure a pavement continues longer.

A rough idea of what I mean… 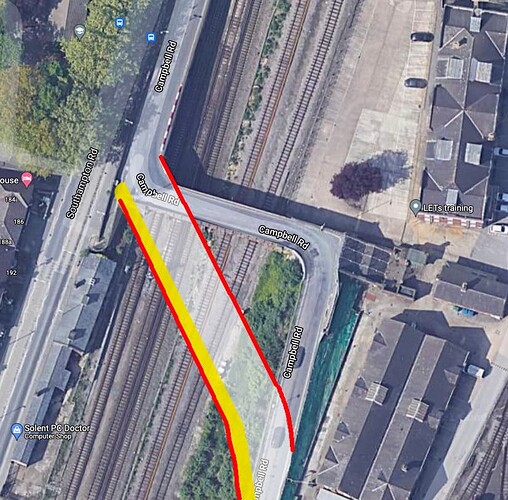 Or keep the current bridge as it is for pedestrian/cycle traffic and put the money towards linking the rail-locked land to the Chickenhall link road? I suspect neither option stands a chance sadly. 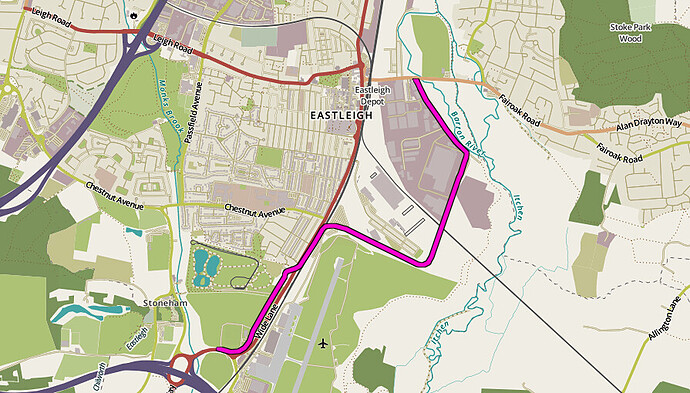 Boost for long-awaited road project thanks to £475million pot

EFFORTS to get a long awaited Hampshire road project underway have been given a major boost thanks to a pledge in the budget.

The problem with accessing via Chickenhall would be the fact the road would have to somehow get over/under the railway line to Fareham AND the line that runs round the end of Campbell Road - which makes a loop for the depot, enabling trains to ‘turn’. The Campbell Road bridge entrance would be the ‘cheapest’ option but only if the will is there…I suspect the usual ‘papering over the cracks’ approach will win out. 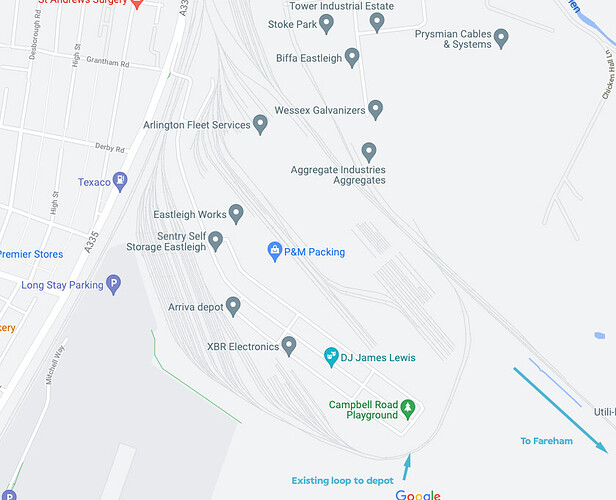 Oh yes, I’d forgotten about that loop. No chance then, not that there was anyway. Papering over the cracks it is.

In ‘Eastleigh Focus’ the Lib Dem newsletter, it says that Lib Dem councillers are pressing HCC to get pedestrian improvement added the scheme. Honestly they should have been in there in the first place, but due to the utter obsession with vehicles and how they must protected at all costs, they seems to be the only consideration. As previosuly stated, this is going to be a missed opportunity to ensure the bridge will be set for decades to come rather than the sticking plaster approach that will undoubtedly happen.

Spoke to one Campbell Road resident about this today, they actually laughed. Lib Dems have approved several new pieces of planning permission to businesses that work over the bridge, in the past few years. Increasing traffic load, without any bridge improvements. There’s a lot more EBC, HCC and Network rail could have done to help residents with this. All of them have passed the buck and let down residents.

Looks like there is such a bridge in the Navigator Quarter site plans!

Navigator Quarter is a 112 acre tax site within the Solent Freeport providing a state-of-the-art research, manufacturing and logistics facilities.

Haha, hadn’t heard of this…where does one every start with this?!!

Firstly it would mean Eastleigh Works, as it stands, would have to go - it is currently owned by Savills Investment Management LLP (Diageo Pension Trust Limited) - bought from St. Modwen for £20.6 million.
The Works is extensively used by Arlington for repairs, renewal and painting of wagon, locomotives and for a wide range of large rail companies - some include comprehensive refit and repair contracts for large fleets of rolling stocks. I cannot this being wound up without a heavy fight.

Secondly, looking at the illustrations, it is teeming with lorries. Eastleigh’s current road infrastructure can barely keep up, let alone this proposed mass warehousing and carbon heavy transportation system all based on lorries - not the plans do not show how this scheme will connect with the M27 - funnelling it through the roundabout by the airport and over the narrow bridge by Southampton Parkway station is a pipe dream and would lead to more traffic, queues and pollution.

No addition carbon neutral rail options are even planned - a pro-active approach such as the successful DIRFT (Daventry) warehousing/rail hub is what is needed to make it anywhere vaguely near a true a rail hub. With only one siding shown (on the very poorly detailed plans) is not even a nod to any kind of realistic sustainability or attempt to use the railway at its full potential. At the moment, everything is geared to intensive road transport - of which the plan is suspiciously lacking actual road connections for real world analysis.

I cannot see this getting off the ground.

It does mostly seem like a work of fiction, and one that’s backward looking not forward looking.

It does seem curiously retro, lots of lorries and huge warehouse, in its planning. 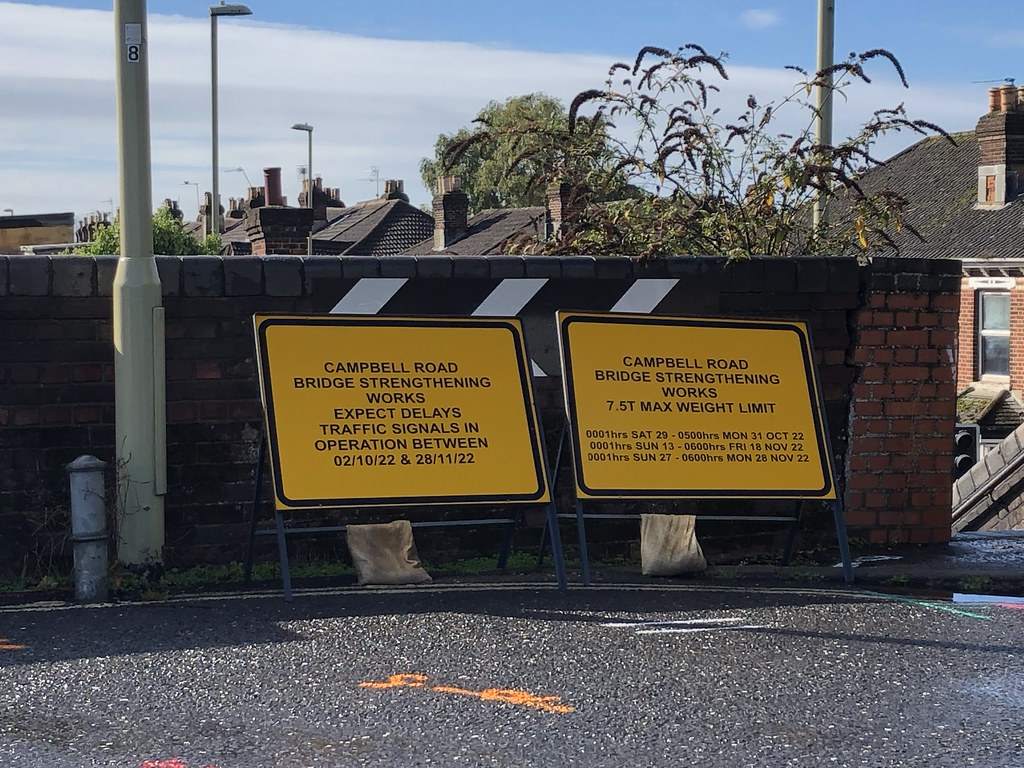 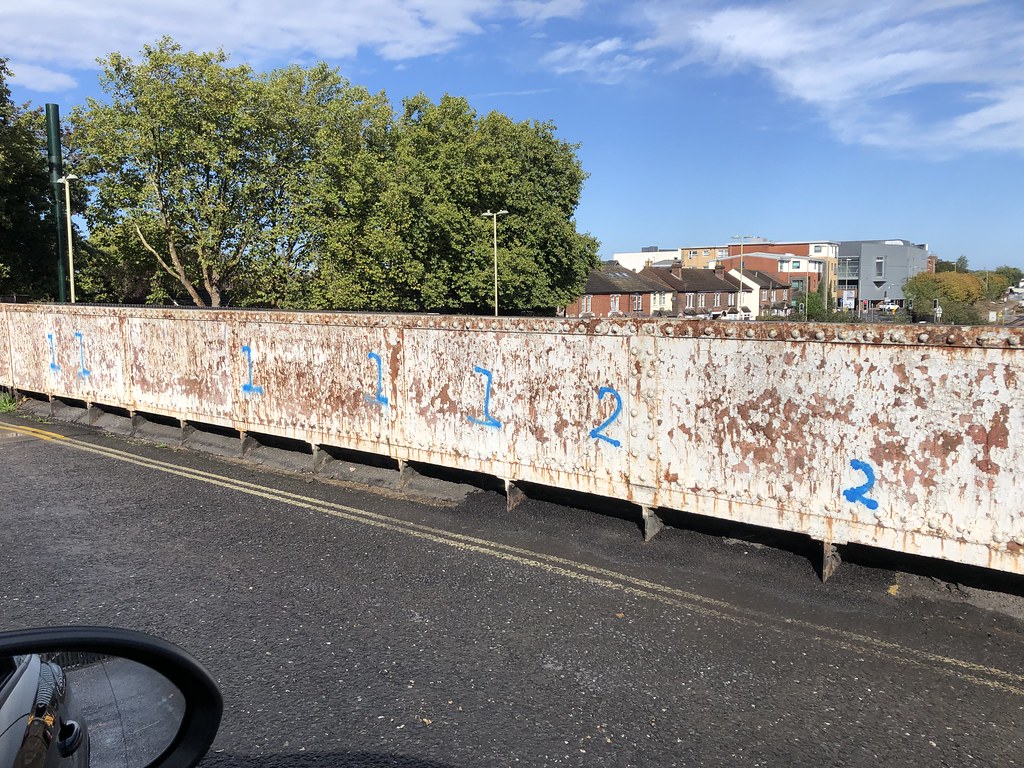 The strengthening work continues on Campbell Road bridge - not actually doing anything useful for the pedestrians or reducing the harsh angles for motorists - the squashed barrier on the left is testament to that) - all in all its another sticking plaster approach to assets management. 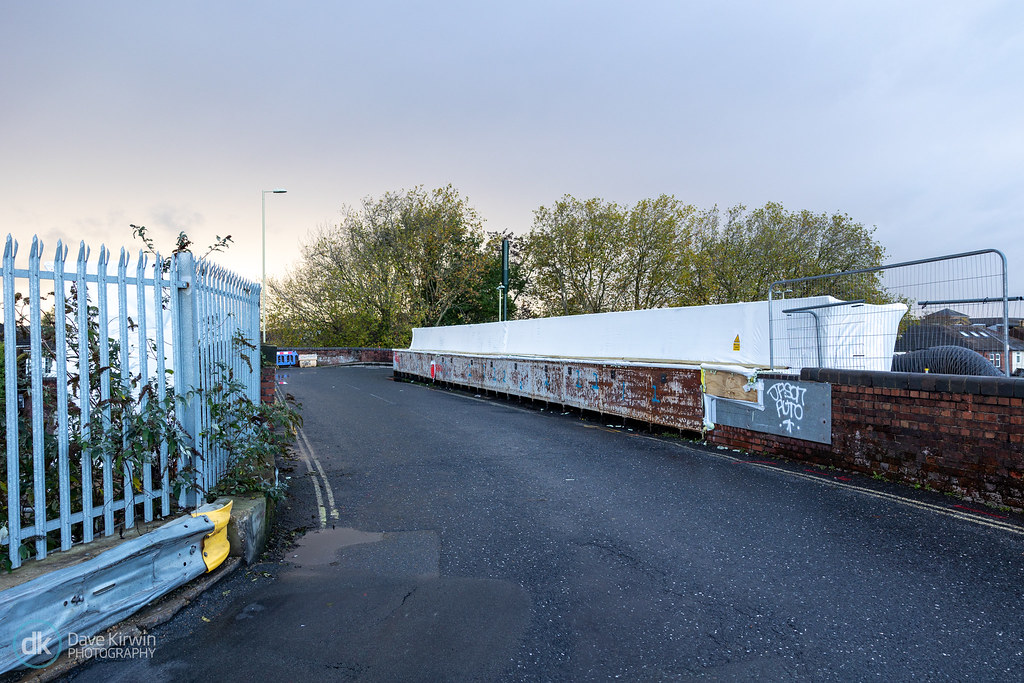