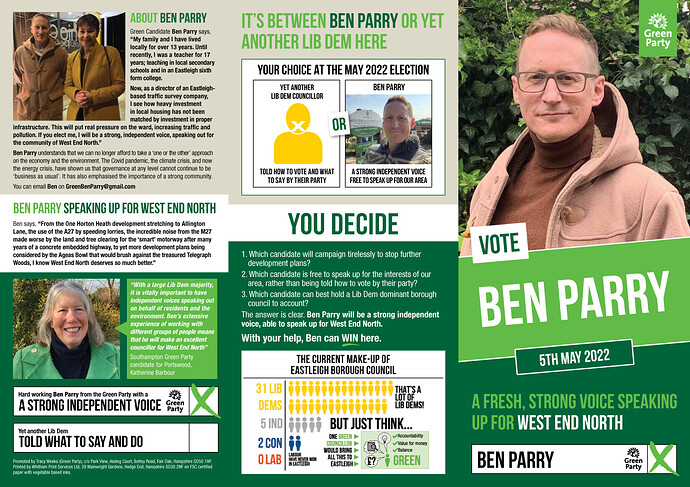 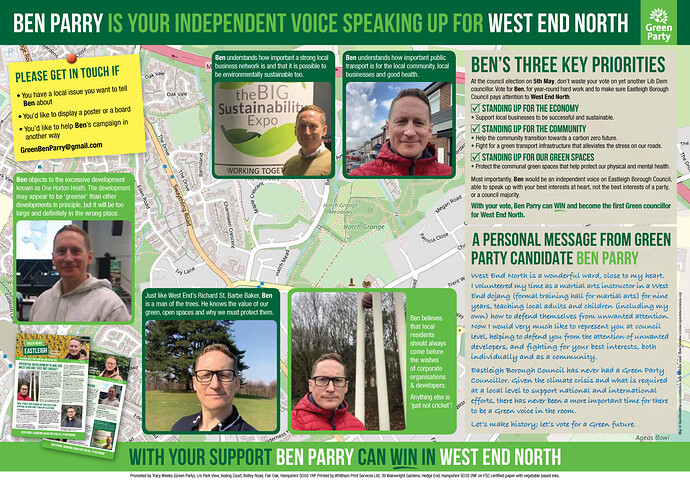 Ben objects to the excessive development known as One Horton Heath. The development may appear to be 'greener than other developments in principle, but it will be too large and definitely in the wrong place.

Ben understands how important a strong local business network is and that it is possible to be environmentally sustainable too.

Just like West End’s Richard St. Barbe Baker, Ben is a man of the trees. He knows the value of our green, open spaces and why we must protect them.

Ben understands how important public transport is for the local community, local businesses and good health.

Ben believes that local residents should always come before the wishes of corporate organisations & developers. Anything else is just not cricket!

BEN’S THREE REY PRIORITIES
At the council election on 5th May, don’t waste your vote on yet another Lib Dem councillor. Vote for Ben, for year-round hard work and to make sure Eastleigh Borough Council pays attention to West End North.

STANDING UP FOR THE ECONOMY Support local businesses to be successful and sustainable.

STANDING UP FOR THE COMMUNITY
Help the community transition towards a carbon zero future.
Fight for a green transport infrastructure that alleviates the stress on our roads.

STANDING UP FOR OUR GREEN SPACES • Protect the communal green spaces that help protect our physical and mental health.

Most importantly, Ben would be an independent voice on Eastleigh Borough Council, able to speak up with your best interests at heart, not the best interests of a party, or a council majority. With your vote, Ben Parry can WIN and become the first Green councillor for West End North.

A PERSONAL MESSAGE FROM GREEN PARTY CANDIDATE BEN PARRY
West End North is a wonderful ward, close to my heart. I volunteered my time as a martial arts instructor in a West End dojang (formal training hall for martial arts) for nine years, teaching local adults and children (including my own) how to defend themselves from unwanted attention. Now I would very much like to represent you at council level, helping to defend you from the attention of unwanted developers, and fighting for your best interests, both individually and as a community.

Eastleigh Borough Council has never had a Green Party Councillor. Given the climate crisis and what is required at a local level to support national and international efforts, there has never been a more important time for there to be a Green voice in the room. Let’s make history; Let’s vote for a green future.

ABOUT BEN PARRY Green Candidate Ben Parry says, “My family and I have lived locally for over 13 years. Until recently, I was a teacher for 17 years; teaching in local secondar schools and in an Eastleigh sixth form college. Now, as a director of an Eastleigh-based traffic survey company I see how heavy investment in local housing has not been matched by investment in proper infrastructure. This will put real pressure on the ward, increasing traffic pollution. If you elect me, I will be a strong, independent voice, speaking out the community of West End North.”

Ben Parry understands that we can no longer afford to take a ‘one or the other app on the economy and the environment. The Covid pandemic, the climate crisis and the energy crisis, have shown us that governance at any level cannot continue to be business as usual’. It has also emphasised the importance of a strong community You can email Ben on GreenBenParry@gmail.com

BEN PARRY SPEAKING UP FOR WEST END NORTH Ben says, "From the One Horton Heath development stretching to Allington Lane, the use of the A27 by speeding lorries, the incredible noise from the M27 made worse by the land and tree clearing for the ‘smart’ motorway after many years of a concrete embedded highway, to yet more development plans being considered by the Ageas Bowl that would brush against the treasured Telegraph Woods, I know West End North deserves so much better.

“With a large Lib Dem majority, it is vitally important to have independent voices speaking out on behalf of residents and the environment. Ben’s extensive experience of working with different groups of people means that he will make an excellent councillor for West End North” Southampton Green Party candidate for Portswood, Katherine Barbour

The answer is clear. Ben Parry will be a strong independent voice, able to speak up for West End North. With your help, Ben can WIN here.

BUT JUST THINK. ONE GREEN COUNCILLOR WOULD BRING ALL THIS TO EASTLEIGH

Is it just me, or is @BDP / @Eastleigh_Greens missing a Lib Dem?

Can’t complain too much mind, at least he’s putting numbers to his charts etc.

Yikes and oops!!! Proof that I was an English teacher and not a Maths teacher! Genuine error. I must have run out of yellow ink!