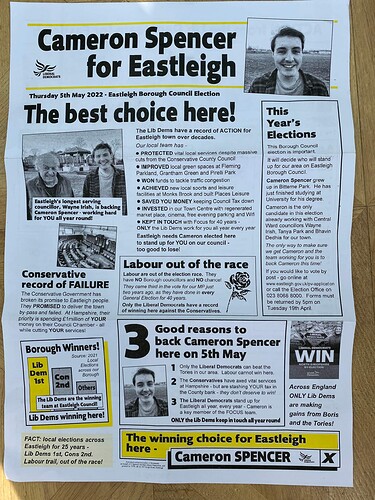 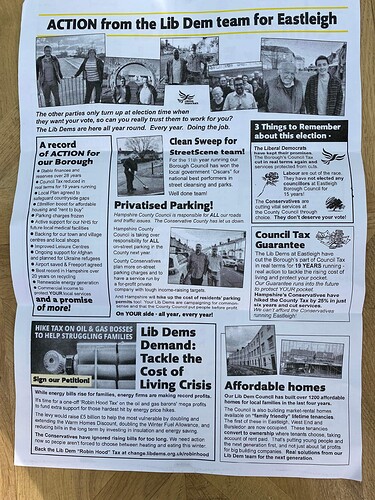 On the front page it states that included in the Central Ward councillors is Cllr Tanya Park. At Borough level Cllr Park is Eastleigh North.

The Privatised Parking, i have just read the report and Hampshire is ending all the remaining agency agreements and having one central operation. Unless i misread it, i didnt see anything in there about increasing cost of permits. Hampshire permit charge is £50 per vehicle, i cannot see anything about higher charge for a 2nd vehicle. I think Hampshire policy is a maximum of 2 permits per property but this can be reduced if you have a driveway/garage.

On the front page it states that included in the Central Ward councillors is Cllr Tanya Park. At Borough level Cllr Park is Eastleigh North.

Could this be because the Lib Dems are trying to rewrite history and conveniently forget Eastleigh Central Cllr Tina Campbell also worked tirelessly along side them for the past 5 years?

This reads a somewhat rude towards Cllr Tina Campbell.

(who left the Lib Dem party to stand as an independent).

I predict an imminent escape from north for Cllr Park, into central. Evidenced by her not even running for Boyatt Wood Parish but jumping ship to Eastleigh, and now this!